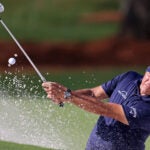 Phil Mickelson hits a shot on the 7th hole at Augusta National Golf Club during the Masters.

Check in every week for the unfiltered opinions of our writers and editors as they break down the hottest topics in the sport, and join the conversation by tweeting us @golf_com. This week, we discuss the Match III, Tiger and Charlie Woods playing at the PNC Championship, the Masters and more.

1. The Match III is set for this Friday at Stone Canyon GC in Oro Valley, Ariz. Phil Mickelson and Charles Barkley will square off against Steph Curry and Peyton Manning. Which of those four will most entice you to tune in, and why?

Michael Bamberger, senior writer: Steph Curry. He looks like he could be about 22 years away, with a lot of practice and a lot of improvement, from a second career on the PGA Tour Champions Tour.

Josh Sens, senior writer (@JoshSens): Of all the just-add-water Matches we’ve seen in recent times, this one has the best group chemistry, on paper at least. But of the individuals, Barkley, by far. He’s the funniest and most relatable of the group, and word is that he’s made huge off-camera improvements in his swing lately, so watching him under the spotlight should be good entertainment.

Dylan Dethier, senior writer (@dylan_dethier): Lefty. He’s the glue that holds these things together, and he’s only getting better — he was hilarious in the Match II, if that’s what we’re calling it. Without Phil, there is no match.

Alan Shipnuck, senior writer (@alanshipnuck): I agree with Mike – Steph is a hard-core and extremely talented golfer in his spare time. It will be fun to watch him do his thing.

2. The biggest difference between this edition of the Match and the first two iterations is no Tiger Woods. How much does Tiger’s absence impact the watchability of the event?

Bamberger: No, not at all. You watch these things, if you watch them at all, because you’re looking for the pleasant numbness that comes from watching any of these essentially meaningless off-season golf events while the various complications of real life unfold elsewhere. They’re a holiday within a holiday, needed now more than ever.

Sens: Agreed. And as Michael has pointed out rightly before, these kinds of confections aren’t really Tiger’s thing. They showcase his weaknesses (televised banter), not his strengths (competing in meaningful events). It’s like watching Mozart play Chopsticks.

Piastowski: Not much. You might lose the curious, how’s-Tiger-looking fan, of which there are a few. But it’s a loose, fun event with seemingly four loose, fun golfers, which should more than make up for the absence of Woods.

Dethier: You’re all delusional. Tiger Woods not showing up for this edition is a huge loss for this franchise, even if the actual substance of his contributions left something to be desired. Once we’re watching, it’ll be just as fun if not more so — but in the golf world, Tiger still elevates everything to the next level.

Shipnuck: Everyone is right! We need/want Tiger’s star power, but when the lights turn on, he goes inward. So fewer people will tune in, but it will probably be more fun.

3. Speaking of Woods, he announced last week that he and his 11-year-old son, Charlie, will play together in next month’s PNC Championship, a team event that pairs major winners with family members. How much of a marketing/ratings boost will Team Woods provide to what is normally a fairly low-key affair?

Bamberger: Huge. Young Charlie’s swing is out of a dream. I’m looking for swing tips wherever I can find them, and in Charlie, I think we can see the golf-swing ideals that Tiger holds dear. As I type, I’m thinking of Charlie’s backswing rhythm, and Tiger’s own, from his days as a spirited junior golfer. Tiger started as a kid with clubs that were too heavy for him (he has said). I’m sure Charlie’s clubs are weight-appropriate for him, but he takes the club back like it’s a log. Like Boros did, like Fred does, like Tiger does still today, at least on the shorter clubs. Nobody talks much these days about backswing rhythm. It’s not part of the Brooks-Bryson-JT method. But it’s had a long history of success, and I think it’s one of Tiger’s ultimate keys. So I’ll be watching.

Sens: A big-time boost. We’ve watched Tiger in pretty much every golf permutation imaginable over his career. This is one we haven’t seen. And it’s one that he seems genuinely keen to be a part of, as opposed to those aforementioned Matches.

Shipnuck: It’s a monumental boost. No joke, I think the Golf Twitter is more excited about Charlie than any player currently competing on the PGA Tour. It’s gonna be wild.

4. Robert Streb won his second PGA Tour title on Sunday, edging Kevin Kisner in a playoff at the RSM Classic. One victory on a player’s resume proves that a player can win on Tour. What is the significance of a second win?

Bamberger: That elite golf can be played without a golf glove and at a ready-golf pace.

Sens: The greatest significance has got to be for the player themself. In Streb’s case, it had been six years since his last win. At some point in that long drought, doubt has to start creeping in. For anyone who has pushed themselves hard enough to get to that level, cashing paychecks alone can’t ultimately be enough. Streb’s turkey is going to taste especially good this year, which is something I never say about turkey.

Piastowski: Very significant. You’re not a one-hit wonder. You didn’t just get on a four-day heater. And now the win opens up the door to all kinds of additional opportunities, including the Masters. Streb did it impressively at the end, too. He hit a hell of a shot on 17 to draw back into a tie for the lead after he entered the day up three. He gave himself a good look on 18 in regulation. Then his approach on the second playoff hole, against one of the better players on Tour in Kevin Kisner, will go down as one of the shots of the year. Good stuff.

Shipnuck: Well, there are plenty of guys who are rarely factors who then pop up and snag a second win (paging Jim Herman). But, for sure, it stamps a player as the real thing.

Dethier: There are a lot more one-time winners than two-time winners, so it basically means you’ve put yourself in the right spot at least a couple times — and answers the bell once you’ve arrived there. I was impressed to see Streb hold that three-shot lead. It’s difficult to play with a lead.

5. Now having had a week to process it, what most sticks with you from a Masters unlike any other?

Bamberger: Johnson holing out to win the thing with such nonchalance. Also, Tiger’s closing six holes. Also, that events are maybe better with far fewer fans. It lets everybody really focus more on the golf.

Sens: DJ stripped a lot of the drama from the event. But man, that Masters website was impressive. Coverage of every shot by every player. Welcome to the future of golf broadcasting.

Piastowski: DJ. And what next year could bring. It seems like everything is aligned in his game. And if you’re a fan of dominant runs, that means you may very well get one.

Shipnuck: Yes, it’s all about DJ. It’s time to recognize we are witnessing a historic run. Over the past five seasons, he has conquered two of golf’s citadels, Augusta National and Oakmont, and won a whopping 16 tournaments (including four WGCs and four playoff events). Obviously the only missing on his resume has been major championships. It feels like he’s going to pick off a few more in short order and really establish himself as a player for the ages.

Dethier: The sightlines at Augusta National. It’s better with fans, but it’s special without ’em, too, and the property was a big winner this year. And yes, DJ made golf look easy; Bryson DeChambeau helpfully reminded us that it’s not. Finally, it seems more miraculous than ever that Tiger Woods won in 2019.

6. Happy Thanksgiving! What are you most grateful for in this golf year?

Bamberger: That all across this vast golfsphere, tee sheets at courses of every type are filled and that millions of people, many of them new to golf, are experiencing the odd joy this game brings.

Sens: How lucky those of us who play are to have a hobby that’s not just safe during these times, it’s healthy. Also, on an extremely selfish note, after five months on the DL with a shoulder injury, I have started hitting half-wedges. I knew I would miss golf if it were ever taken away from me. I just didn’t realize how intensely I would miss it.

Piastowski: That you’re reading this and I’m writing this. Simple enough. Until you realize what’s swirling around just outside your window or just above your phone. Let’s please meet again here next year, OK?

Shipnuck: I like all of these answers. For me, it’s the camaraderie that comes with the game. For eight months, I’ve hardly seen anyone but my immediate family … except when playing golf with friends. It’s been a life-saver.

Dethier: I’m thankful for Seattle’s municipal course network, which has been a welcome home for me and a couple friends since re-settling here a couple months back. There’s an energy to ’em that’s authentic, fun, special. Glad to be here.