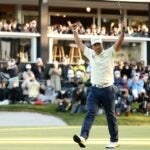 Hideki Matsuyama on Sunday on the 18th hole at Accordia Golf Narashino Country Club, after his win at the Zozo Championship.

Check in every week for the unfiltered opinions of our writers and editors as they break down the hottest topics in the sport, and join the conversation by tweeting us @golf_com. This week, we discuss Hideki Matsuyama’s victory in his home country of Japan, Jin Young Ko’s surge and Phil Mickelson’s comments on driving accuracy, and more.

1. Hideki Matsuyama rallied from a one-shot deficit with eight holes to go win the Zozo Championship by five shots. The event was played in Matsuyama’s home country of Japan, and on the Golf Channel broadcast, Pat Perez described the atmosphere as if fans had seen Elvis. Between this victory and Matsuyama’s winning week at the Masters, what did you learn about his game in 2021 that you didn’t know a year ago?

Sean Zak, senior editor (@sean_zak): Gee, I don’t know. He’s still a very poor putter by Tour standards. Perhaps we’ve learned that he can still ball-strike his way to a victory when the moment is grand? There’s pretty much nothing more mind-bending than the back nine at Augusta, but he didn’t show it. I think we’ve learned what he’s learned: that his caddie, Shota Hiyafuji, is a great teammate.

Josh Sens, senior writer (@JoshSens): A big sports bettor who parses the stats much more closely than I do tells me that Hideki’s putting improves by leaps and bounds when the greens are bentgrass. But that’s deeper in the weeds than anything I’ve got on my own. The perfectionist streak in him is what struck me. Especially at the Olympics. I recall one shot in particular, an approach on the back side, when Hideki did that one-handed finish and slumped his shoulders. The ball ended up about 10 feet from the flag, pin high. I texted a Japanese reporter friend saying, “Hideki doesn’t look happy with that result.” My friend texted back: “Never.”

Dylan Dethier, senior writer (@dylan_dethier): I’ve learned just how much there still is to learn. In August of 2017, Matsuyama revealed at a press conference that his wife had given birth more than a month earlier. This was exciting news, and noteworthy for at least one surprising reason: Nobody knew he was married. Why? “No one really asked,” he said. Hideki and Shota occasionally reveal little nuggets of off-course fun on social media; what I’ve learned this year is that this team seems to goof off plenty and have a blast together. But even that serves as a reminder that Matsuyama likes his private life kept private.

Michael Bamberger, senior writer: This is not a statement about his game, but about his status. In Japan and across large swaths of Europe, he’s as big as Jumbo (Ozaki) was at the height of his powers, and then some. Bigger, really, than all the Ozaki brothers put together. Huge.

2. Jin Young Ko’s attempt to shoot a record 15th-straight round in the 60s fell just short when she shot an opening-round 71 at the BMW Ladies Championship — then she shot rounds of 64, 67 and 64 again and won the event in a playoff. It marks Ko’s fourth win in seven events, and she is expected to unseat Nelly Korda atop the world rankings. As the golf year enters its final weeks, where does Ko’s surge rank among the hottest runs of 2021?

Zak: It’s the hottest run! I think we can make that claim pretty comfortably, even if Jon Rahm might beg to differ. She added tallies to her victory total. Rahm, technically, added only one.

Sens: Can’t argue with those numbers. Now, how to turn those gaudy figures into TV ratings to match?

Dethier: Haven’t seen a dominant run like this since Zak at the office Golden Tee machine in December 2019. Korda made her run, and now Ko has chased her down. The consistency stands out — she’s relentless!

Bamberger: Absolutely, and please, save your typing, dear readers, if you’re going to accuse of us being “woke” but highlighting the great run by a woman golfer. Nothing in golf this year touches it.

3. Phil Mickelson downplayed the importance of accuracy off the tee this week. Ahead of this week’s Dominion Energy Charity Classic on the PGA Tour Champions, Mickelson said the host course would require him “to be a little bit more patient and manage my game a little bit better,” and a reporter noted that and asked: “Please correct me if I’m wrong, [but] your last win on this tour, you were 81st in driving accuracy, I think. I don’t know if I have that exactly correct, but would you get away with that here this week?” To which Mickelson replied: “So, I look at longest, like I try to hit it the farthest out here, and I was No. 1 in driving distance. That’s the way I look at it. If you want to look at stuff that’s irrelevant, have at it. What I’m looking at is distance. I want to hit it — I want to fly it 305 and try to — because I’m a really good wedge player, so if I get wedges in my hand, I’m going to be tough to beat.” Mickelson would finish the event tied for 49th. Is Mickelson’s distance-obsession wise, worrisome or somewhere in between?

Zak: Not worrisome at all. He’s doing exactly what the modern game asks and allows. It’ll probably pay off on the PGA Tour once every other year. It’ll pay off on the Champions Tour a lot. Phil added he’s just trying to have fun on the senior tour and keep competing. What he’s doing is exactly that.

Sens: Not worrisome for him. But it doesn’t make the game more interesting.

Dethier: It’s an interesting thought experiment and an important analytical question. But Mickelson is still at his best when he’s keeping the ball in play. Simply put, if he could drive it straighter, he would be much better. The death of golf this ain’t.

Bamberger: He’s doing what he’s paid to do: Figure out a way to shoot the lowest 72-hole score he can, or lowest 54-hole score. As far as an approach, it stands to reason. As far as making the game more compelling to watch, I think it doesn’t work, but others would surely disagree.

4. In the wake of the best season of his career, world No. 1 Jon Rahm is taking off a month to recharge. “More than my body, it is my mind that can’t take it,” he said. “… If we add it all up, I need to rest.” He added, “This is the first time in my life that I don’t want to see a golf club.” With no real off-season in golf anymore, do you sense the mental grind Rahm describes has become a common problem?

Zak: I think each player hits their own limit. Or rather, they learn their limit. You never really hear Dustin Johnson talking about needing a mental break. Rahm has grinded all year through the many ups and very public downs. He’s at his limit. I’ll bet he’s learned something in the process. I don’t think it means anything special for anyone else.

Sens: No doubt he’s not alone. It’s a job, and a demanding one. But you’ll forgive me for not shedding any tears.

Dethier: It’s a refrain I’ve heard from many a playing partner. Who hasn’t threatened to give up the game after a rough couple rounds? If Rahm had been asked the next day or even after dinner, he may have answered differently. The grind is part of the deal.

Bamberger: Yes, if you drill deep into the statements and body language of all these elite players, they all say that. It’s a shame. It’s the pressure of modern life, where all focus, in anything, is so extreme.

5. Golf Channel analyst Brandel Chamblee and architect Agustín Pizá are planning, as our Josh Sens described it, a course that would double as a home for the finest women golfers in the world, a state-of-the-art facility that would be to the LPGA Tour what TPC Sawgrass is to the PGA Tour. The course, in southern Texas, would be designed specifically with women’s golf in mind, with the goal of playing host to a marquee, Players Championship-type event. What do you make of Chamblee and Pizá’s plan?

Zak: It’s absolutely brilliant in theory. I’m excited to see it in reality. I get the sense we’re still a number of years away. Until then, I’m very optimistic!

Sens: Chamblee’s not wrong in saying it’s long overdue. I’m keen to see what happens in the transition from concept to reality.

Dethier: With the ANA’s move away from Dinah Shore, the LPGA should absolutely be targeting signature venues that it can make distinctly its own. Whether or not Chamblee is the one to do it, he’s definitely onto something — particularly the idea that a course shouldn’t just be built from the tips and then adapted from there.

Bamberger: I was delighted to hear about, it but it’s nothing too surprising. When the elite women amateurs play Augusta National from the so-called members’ tees, it plays perfectly — just as AMac and Bob wanted it to play.

6. On this week’s Subpar podcast, Bryson DeChambeau’s caddie, Brian Zeigler, revealed that his boss’ bag has “got to weigh 55 pounds,” making it one of the heftier bags on Tour. What’s the heaviest and/or oddest item you have ever stashed in your own bag?

Bamberger: Cans of dog food. My bag was actually too light and top-heavy. It needed ballast.

Zak: Here in Chicago, there’s a nice, turf football field near the Diversey driving range. I brought the football cleats with me to the range so I could run some sprints after taking my cuts. I then left the cleats in the golf bag for a couple weeks and found them in there on the next driving range I visited, up at SentryWorld, 240 miles away.

Sens: My bag tends to run pretty lean. But once, rummaging through to find a ball mid-round, I came across half a danish that must have been in there for six months. One of my playing partners was so hungry he asked if he could eat it. He did. And survived. Probably no worse for him than a hot dog.

Dethier: Being from the Massachusetts/Vermont border, maple syrup has always been a staple as a Sunday morning topping or a gift for out-of-towners. But one day after a round, my dad set a small bottle of syrup on top of my bag. I didn’t notice, it slipped between the headcovers and could have stayed at the bottom of my bag forever except the bottle eventually broke. After wondering how on earth my grips had gotten so sticky, I got to the bottom of things. And I got a new bag.