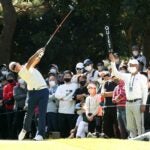 Hideki Matsuyama rolled his 6-foot par putt past the right edge of the hole on the 8th at Accordia Golf Narashino Country Club, and the gallery reacted to every inch. They cheered when he hit it, shrieked when it missed and hushed when it stopped. His three-putt bogey, from 30 feet, had dropped his lead to one during Sunday’s final round of the Zozo Championship. After the 10th, he’d trail by a shot.

After 18, Matsuyama would poke his head through the metal circle that sits atop the Zozo trophy and smile.

In one of the best closing kicks you’ll see, Matsuyama would overcome the deficit, shoot a back-nine 32 and win by five. And do it all at home. Outside of (perhaps) his Masters victory in April, the Zozo win goes down as unquestionably his most special, as it’s his first on the PGA Tour in Japan.

“Well, the thing is, the people are going to see the scores tomorrow morning, they’re going to look and go, oh, it was an easy win for Hideki Matsuyama,” analyst Dom Boulet said on the Golf Channel broadcast. “But far from it. He had lost the lead earlier on this back nine.

Here’s how he pulled it off:

No mention of this victory should come without some description of Matsuyama mania in Japan. We’ll let the colorful Pat Perez take it from here.

“I played behind Hideki yesterday, and the crowds are just — it’s like seeing Elvis,” Perez said on Golf Channel on Saturday. “It really is.”

“But he is such a phenomenal player. He’s had it for many years now it’s second nature to him, but the pressure, I can’t imagine being the guy that he is in this country right now, and everybody wants him to win, and here he is leading and the pressure doesn’t even look like it fazes him, though.”

Add this to that: In 2019, at the first Zozo in Japan, Matsuayama would finish second to Tiger Woods, the victory tying Woods atop the PGA Tour’s all-time wins list. And this summer, at the Olympics in Tokyo, Matsuyama would fall in a seven-man playoff for the bronze medal. It all may not look like it fazes him. But you certainly imagine it might.

“Matsuyama’s, at the moment, going out and winning this,” Boulet said on Golf Channel.

On the 486-yard, par-4 11th, after a drive in the fairway, Matsuyama hit his approach to 25 feet, then curled in the left-to-right birdie putt. Never one to show much emotion, he’d start walking as the putt was moving and pump his fist when it fell. Tringale couldn’t match.

“Unbelievable,” Boulet said on the broadcast. “That’s a one-, two-percent make rate on that sort of putt. Literally one or two in a 100. And he does it on a back nine of a Sunday when he’s one back from the lead. That’s a special moment.”

“The guy works so hard on his putting,” said Ryan Palmer, who tied for 44th, then joined the Golf Channel broadcast for a few holes. “I watch him every day on the putting green working on it, and you see what speed he has. And you saw on 13, I thought it was one of the toughest pin placements we faced all day, and the speed he has on the greens is unbelievable. You know, obviously, you win the Masters, you’re a great putter, and you get these kind of greens and speed’s crucial. He’s showing how good his putting is and hanging in there.”

Matsuyama and Tringale would both par 16 and bogey 17.

“A glimmer of hope [for Tringale],” Boulet said.

A day before, Matsuyama bogeyed the 562-yard, par-5 18th. Up two strokes on Sunday, Matsuyama nearly played the finishing hole in two shots. Off the tee, he’d hit a 3-wood some 320 yards.

“Did you see all the tension there come out of Matsuyama’s shoulders?” Whitaker said on the Golf Channel broadcast.

“Good drive, on the 72nd hole, when you got a two-shot lead will do that for you,” Boulet said.

“Wasn’t remotely done and dust especially with the memories of yesterday wafting between his ears. He’s put one foot toward it, finding the fairway there,” Whitaker said.

Tringale would hit his tee shot right of the fairway, and his second shot would end up more right after hitting a tree. The tournament was all but over then, but Matsuyama wasn’t finished. From 241 yards out, Matsuyama hit it about 240 yards. He raised his eyes to watch his ball fly, then lowered them before it finished. He started to walk as the ball nearly dropped into the hole for an albatross.

“If you’re going to win it, win it in style,” Boulet said.

Tringale would eventually bogey the hole. Matsuyama, from 8 feet out, eagled it. Eight holes after being down one, he was a winner by five. Matsuyama raised both arms, pumped his fist, then pumped both arms.

“Absolutely magnificent,” Boulet said. “What a back nine. He lost the lead for the first time in two and a half days and then to produce a 32 on the back nine and a final-round 65 with an eagle on the last, what a fitting way to end it.”