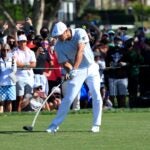 Bryson DeChambeau hits his tee shot on Sunday on the par-5 6th at Bay Hill.

Check in every week for the unfiltered opinions of our writers and editors as they break down the hottest topics in the sport, and join the conversation by tweeting us @golf_com. This week, we discuss Bryson DeChambeau’s victory at the Arnold Palmer Invitational, Jordan Spieth, risk-reward holes and more.

1. He’s baaack. On Sunday, Bryson DeChambeau picked up his first win since the U.S. Open (and eighth PGA Tour title overall), edging Lee Westwood by a stroke at the Arnold Palmer Invitational, at Bay Hill. We’ve seemingly already analyzed every inch of DeChambeau’s game, but there’s always more to unpack! What did you take away from Bryson’s latest power-packed performance?

Dylan Dethier, senior writer (@dylan_dethier): When there’s long rough and slippery greens and things are starting to look impossible, nobody is better suited to pummeling the golf tournament into submission than Bryson DeChambeau. On a day when the field averaged over 75, bogeys lurked around every corner and DeChambeau didn’t have his sharpest ball-striking, the guy made 12 consecutive pars to close this thing out.

Michael Bamberger, senior writer: He putts great when he wins. As do they all.

Josh Sens, senior writer (@JoshSens): Dylan said it well. He hits it so far, and with the strength he has out of the rough, it really doesn’t matter all that much where it goes.

Sean Zak, senior editor (@sean_zak): My takeaway is that he’s able to dial things in pretty quick. A lot of golf fans were quick to write him off when he missed a bunch of fairways at Riviera. On Sunday, he was hoisting the trophy.

2. In the third round, on the par-5 6th, Bryson DeChambeau took a stunning line off the tee that carried 344 yards (and a lot of water) — and all but melted Twitter. (DeChambeau’s Sunday blast at the 6th was also spectacular.) Is there another hole on the PGA Tour, including major venues, where DeChambeau’s distance can provide him such an overwhelming advantage?

Dethier: Well, now DeChambeau is talking about potentially taking his tee shot at 18 at TPC Sawgrass left of the water and flying it onto No. 9 to set up a better angle. (That would also mean an extremely long walk to his ball, but I digress.) When DeChambeau’s line left him 168 yards ahead of Lee Westwood despite his tee shot going only about 60 yards longer, I thought immediately of Dustin Johnson and Jordan Spieth in a playoff at the Northern Trust. Any massive cape hole where carrying it 320 gets you over a corner will give Bryson an advantage, but it’s hard to see any hole more obviously suited than No. 6.

Sens: All good calls. It will be fun to see how he plays 18 at Pebble next time he gets a crack at it.

Zak: No. 13 at Augusta remains tantalizing for him ever since the first round of the 2020 Masters.

3. This is difficult to quantify, but how much impact do you think DeChambeau’s style of play is having on bringing fringe/non-golf fans to PGA Tour telecasts and the game at large?

Dethier: He’s a lightning rod for attention. There’s plenty of grumbling about the way DeChambeau does things, from his emotional reactions to the way he thanks his sponsors. But I think more people than that are fascinated to see how he approaches things and glad to see him in contention. One video shot from behind the 6th tee showed off the enthusiasm at the tournament. And another photo showed Jordan Spieth intrigued by DeChambeau’s Sunday approach. That says it all.

Sens: It’s nothing close to the Tiger Effect. But he is the only other golfer my non-golf-playing friends have ever asked me about. He’s moving the needle, no doubt.

Zak: I think people love how polarizing he is. You’re in on Bryson or you’re out. More than any other pro. His actions on course aren’t always the most forgivable, and his immediate corporate shoutouts after the win aren’t a great look. But few pros alive are more fun to watch work their way through a final round.

4. Jordan Spieth continued to show positive signs this week, notching his third top-5 finish in his past four starts. What one piece of his game is most preventing Spieth from turning these near-misses into wins?

Dethier: His driving. Simply put, Spieth needs to find a few more fairways. If he does that, he’ll have to pull off fewer of his trademark miracle shots to stay in contention — and he’ll be better suited to surviving cold days with his putter, like Sunday (when he actually drove it fairly well and putted quite poorly).

Sens: The tee ball. The putter can bail him out here and there when the big stick goes awry, but it can do so only for so long.

Zak: The Sunday shots. Everything is dropping for him on Saturdays right now. This may seem obvious and not enlightening, but he needs to hit one or two tight on a Sunday instead of grinding constantly. Make his job easier.

5. Rory McIlroy’s solid but not spectacular play (four top-20 finishes in five PGA Tour starts in 2021 but no wins) continued at Bay Hill. Starting the fourth round four strokes back, he made five bogeys and a double en route to a 76 that dropped him into a tie for 10th. “I don’t know what the word is or how to describe it, but just a little dejected,” McIlroy said after his round. “… Like, maybe looking to go in a new direction.” What do you read into McIlroy’s remarks?

Dethier: As someone who gets kinda glum after a disappointing round of golf, McIlroy’s remarks hit home pretty hard with me. This was another frustrating Sunday, and he can’t seem to put it all together when it counts. I hope he finds the spark he’s looking for.

Bamberger: Needs to shake something up. But what can he shake up? It’s not his caddie, his swing, his clubs, his teacher. It’s something in him.

Sens: The issue seems to be 90 percent mental, and 10 percent mental. Having just spent a bit of time with Dustin Johnson, who shakes off disappointment maybe better than anyone who has ever played the game, I can’t help but wonder whether McIlroy would benefit from trying to mimic DJ’s impassive body language. When Rory is going well, he has that boyish bounce in his step. The opposite is true when he starts to sputter. You can see the glumness in his movements. It might feel unnatural for Rory to try the stoic approach at first. But you know, fake it til you make it.

Zak: Those remarks sound like a lack of self belief, which isn’t great! He’s still one of the three best players post-Tiger and showed classic Rory flash on Thursday. Is that close to winning? Eh. Probably not. But not too far either.

6. In honor of the aforementioned 6th at Bay Hill, which gave us some thrills this week, what is the best risk-reward hole in golf?

Dethier: It’s still No. 10 at Riviera, even though that has turned from a true risk-reward hole into simply the Tour’s longest, hardest par-3.

Bamberger: First at Machrihanish, from the back tee, in a wind. And there’s always a wind. Choose your line wisely. Swing your swing.

Sens: Tough to top those picks. But the 16th at Sawgrass is good boom-or-bust fun, as is every hole on Amen Corner. The 3rd at Augusta, too.

Zak: I feel like Riviera’s 10th doesn’t qualify as everyone goes for it now! Some folks need to lay back in order for a hole to be risk-reward, right? I’ll cop out and choose 13 at Augusta. The stakes it often finds itself in are the ultimate tiebreaker.