Tour Confidential: What’s the biggest story through two days at the Players? 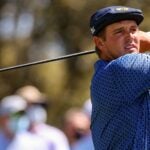 Bryson DeChambeau hits his tee shot on Friday on the 6th hole at TPC Sawgrass.

Check in each day of this week’s Players Championship for the unfiltered opinions of our writers and editors as they break down the hottest topic in the tournament, and join the conversation by tweeting us @golf_com.

We are nearly two rounds into the Players Championship (play was suspended on Friday and will be completed on Saturday). Lee Westwood leads. Bryson is lurking. Rory shot 79-75. The 17th swallowed up golf balls at a near-record clip during the first round. What, to you, is the biggest story through two days at TPC Sawgrass and why?

Dylan Dethier, senior writer (@dylan_dethier): Bryson DeChambeau. He’s plotting and plodding his way around the golf course, missing in the right spots and taking advantage of his advantage where he can. It’s one thing for golf’s biggest bomber to win at a bomber’s paradise like Winged Foot or Detroit, but TPC Sawgrass is certainly not that. What could be a bigger story this week than Bryson capturing the Players Championship?

Michael Bamberger, senior writer: Lee Westwood. I wasn’t too surprised to see him play well for three rounds last week. The fourth round surprised me. And to see him keep going this week does, too.

Josh Sens, senior writer (@JoshSens): Not only that, but when was the last time we had the same final pairings on back-to-back Sundays? Fresh off Bay Hill, here are Westwood and DeChambeau right back at it. As we all predicted, the Players is shaping up to be wonderfully unpredictable yet again.

Nick Piastowski, senior editor (@nickpia): Bryson, Lee, and Bryson and Lee. I wish I could keep the answer streak going. I’ll offer something else. A contending Chris Kirk — who’s been open about his recovery from alcoholism, anxiety and depression — has been a heck of a story so far. A win would make it more so.

Josh Berhow, managing editor (@Josh_Berhow): Dylan is spot on. Big bombing Bryson on the front page of the leaderboard with a bunch of ball-strikers. A victory on a course like this would be huge for his resume. Also, Rory. Take away his Thursday quad and he’s still T124. Tough week for the defending champ.

Alan Bastable, executive editor (@alan_bastable): Oh, it’s Westwood — just a few weeks from 48 and a few years from being lost in the swing wilderness — continuing to throw haymakers at guys half his age. Been fun to watch. Also, how about about the fact that we’re playing this tournament under reasonably normal circumstances? A year ago, who knew if we’d be here — pros, fans, concessions, live coverage of every player on every hole — by March 2021? Inching back toward normalcy feels pretty great.