These were the 5 most expensive makes (and misses!) at the Tour Championship 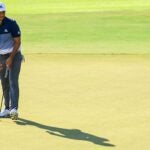 Xander Schauffele's putt on the 18th green was worth a half-million dollars.

We’re all well aware of Dustin Johnson’s financial windfall after he won the FedEx Cup Monday afternoon at East Lake. But with the tournament well in hand, much of the drama down the stretch had to do with players jockeying for position. While we didn’t quite get a $10 million make-or-miss putt at 18 (Johnson made birdie to close out a comfortable three-shot victory) plenty of money changed hands on East Lake’s final green. Here were the five most valuable makes and misses, by my count:

Scottie Scheffler was four under for the day as he got to No. 18, but his booming tee shot just missed the fairway to the left, from which point he had to lay up — which he did ably, leaving himself 64 yards from the fairway.

What happened next was worth a lot, both symbolically and financially. Scheffler sent in a neat wedge shot that skipped to a stop just six feet from the hole. Then he stood over a putt that was for the low round of the day (Patrick Reed also shot 5-under 65), the low youngster for the tournament (a shot ahead of Collin Morikawa) and $300,000 (the difference between $2.5 million for solo 5th and $2.2 million for T-5). He buried it, capping off a heck of a debut season. Speaking of T-5 …

That’s the scenario Collin Morikawa faced on Monday at East Lake when he raced his 15-footer for birdie some 5 feet past the hole. Morikawa had spent much of the day at 15 under par, within sniffing distance of second place, but he’d slipped to sixth place with a bogey-birdie-bogey-bogey stretch on holes 14-17.

Still, if the fear of a third consecutive bogey entered Morikawa’s mind, it didn’t show. Par. Solo sixth. $1.9 million. What a season for the 22-year-old.

Xander Schauffele arrived on No. 18 tee with a very real possibility of still winning the FedEx Cup. He was two shots behind playing partner Dustin Johnson, but they were playing a reachable par-5; what better opportunity for a two-shot swing?

But any realistic visions of making a $15 million eagle vanished with Schauffele’s tee shot, which ended up in the left rough. From there he was forced to lay up, leaving a 68-yard third shot from the fairway. With Johnson now in the the greenside bunker in two, Schauffele’s only hope of winning would be to hole his approach. And his only hopes of finishing solo second would be to get up and down for birdie.

Schauffele was well aware of the situation.

“Yeah, I looked up at the board,” he said. “I was hoping to hit my wedge a little closer than I did. I knew I wasn’t going to win, and I figured, might as well try and make that last putt and make a little extra cash.

“I didn’t, which sucks, but I tried my best, and that’s all that matters.”

Schauffele’s wedge shot came up 14 feet short of the hole, leaving him a birdie putt that would either leave him in solo second ($5 million payday) or T2 ($4.5 million). The putt skittered by the edge, but let’s not shed too many tears on Schauffele’s behalf. He left East Lake with a whole bundle of cash as well as the lowest 72-hole score; his bank account and world ranking (No. 7) are both looking healthy heading to the new season. Make or miss? MAKE and MAKE

This might be cheating, because we’re counting two putts instead of one, but Tyrrell Hatton was the only player in the top 10 to birdie No. 17 on Monday, so he gets some extra credit here.

Very simply, if Hatton had finished par-par he’d have settled at 10 under par for the week and in a two-way tie for 10th place with Sungjae Im. The two golfers would have split 10th and 11th place money and each pocketed a respectable $790,000.

Instead, Hatton finished with a bang. He nuked his tee shot down the fairway at No. 17, took his approach shot right at the flagstick and poured in a six-footer for birdie. He found the rough at No. 18, but played his second shot aggressively and wound up just short of the greenside bunker. From there he played a neat chunk-and-run, leaving himself five feet up the hill. He made that putt — and made $1.3 million in the process. Hats off to Tyrrell.

Justin Thomas arrived at No. 18 at East Lake without any real chance at winning the FedEx Cup. He was three shots behind Dustin Johnson and a shot behind Xander Schauffele, too, after making bogey at 17. For a moment, he’d been in solo second; now he was in danger of slipping.

But Thomas, despite busting a banana slice off No. 17 tee, split the fairway at the 18, leaving himself 255 yards home. From there he played a relatively safe shot to the fairway opening just short of the green, then pitched it to six feet, three inches.

At this point, there was big money on the line no matter what. Schauffele was one shot ahead, but Thomas’ other main challenger was his playing partner, Jon Rahm. As Thomas surveyed his birdie putt, Rahm rammed in a 10-footer for birdie to join Thomas at 17-under — a share of third place. Suddenly Thomas’ putt meant the difference between T3 (a $3.5 million payday) and T2 (a $4.5 million payday).

Never a doubt. Thomas found the bottom of the cup and banked a little extra change; no doubt good news with holiday shopping just around the corner.

“I mean, it sucks because I didn’t win,” Thomas said afterwards. “You’re obviously playing for a lot of money, but I’m here to try to win the tournament and came up just a little short.”

Credit to his competitive spirit, but Thomas did win an extra million bucks on the final green — so he’s got that going for him. The FedEx Cup has some strong consolation prizes.