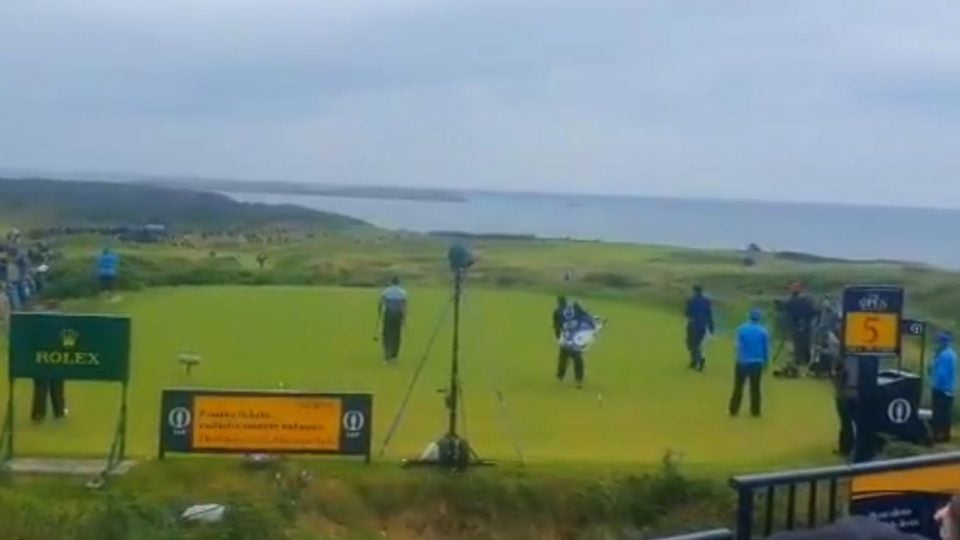 A freeze fame moments before Sergio Garcia throws his driver at his caddie on Sunday at The Open.
@RayOwensMU20

Just when you thought the 2019 Open Championship was in the rearview, it comes roaring back into the picture. This time, it’s via a recently resurfaced video of a major champion throwing his club at a caddie after a poor shot. The pro in question? None other than Sergio Garcia.

Many players struggled mightily in the horrendous weather that swept through Royal Portrush on Sunday during the final round of The Open. Sergio was one of them. The mercurial Spanish star had a great tournament going before Sunday, finishing the third round at one under. He was far off the lead, but it still represented one of his best weeks of play in a while.

When Garcia’s round began on Sunday, nothing seemed off. He opened with four-straight pars, and moved onto the par-4 5th hole still at one under for the tournament. That’s when things went haywire.

Garcia took a mighty swipe with his driver on the elevated teeing ground, but he hooked it well left. As the volunteer pointed his yellow directional sign to the left, Garcia didn’t bother watching his poor shot, and instead bent down calmly and picked up his tee. He began to walk slowly forward, and then, suddenly, he whipped his driver to the right, throwing it with some force at his caddie. The club made an audible smack when it made contact, followed by an audible groan from the audience. Check it out below.

Garcia is known for losing his cool occasionally on the course (and in the press room), but you still have to wonder why a well-respected, legendary veteran golf figure still needs to throw fits on the course.

Garcia went on to make double bogey on the hole, and it didn’t get much better the rest of the way. He ultimately finished with a seven-over 78 on the final day at Portrush, dropping him all the way down to six over for the tournament, in a tie for 67th.