Did Tony Finau’s shadow really move his golf ball into the hole?! We asked the experts 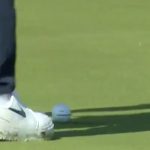 Tony Finau stands over his ball on Friday on the 1st hole at Austin Country Club.

Finau’s shadow may (or may not) have gotten his ball the remaining ⅕.

Finau is good. But a wizard? A Jedi? What in the name of Harry Potter and Luke Skywalker is this?

Finau, during Friday’s play at the World Golf Championships-Dell Technologies Match Play, hit his second shot on the par-4 1st hole at Austin Country Club to just under 8 feet. His opponent, Jason Kokrak, then made his par before Finau hit his birdie putt, which hung just on the left edge of the cup.

“Oh, that ball might fall in. It has to fall in,” an announcer said on the PGA Tour Live broadcast. “Put your shadow on it.”

“I’ve never seen it work either, but people say that,” the first announcer said.

Finau stood up from his putt and walked over to the right of his ball. It was still hanging. He then took three steps to the left, and his shadow covered the ball. One second later, it dropped.

“There he did it,” the first announcer on the PGA Tour Live broadcast said. “Mark it down. That’s the first time that has ever worked.”

The theory is that with the sun blocked, the grass would bend just enough to drop a hanging putt. But could it happen in 10 seconds? According to Rule 13.3, “the player is allowed a reasonable time to reach the hole and 10 more seconds to wait to see whether the ball will fall into the hole.”

A course superintendent in Arizona said that it’s possible — and that he had done it himself. Another super, this one in California, wasn’t so sure. Both asked not to be named, as they hadn’t studied it fully.

“I’ve heard people say it works, but I don’t see how that holds up to science,” the California superintendent said. “I just don’t see how 10 seconds would be long enough to change the temperature or the physiology of the plant enough to make a difference.”

A USGA Green Section official, in an email, said it happens — in Hollywood. The official said the thought gained traction from the golf movie The Legend of Bagger Vance, where the Will Smith character told the Matt Damon character, “Funny thing is, the blades of grass gonna follow the sun. The grain is gonna shift. That same putt gonna go one way in the morning, the other in the afternoon.”

“Despite what many believe to be true, often in response to watching the movie The Legend of Bagger Vance, grass does not follow the sun nor does it lay over when shaded, a response known as phototropism,” the official said in an email. “Golf commentators probably have also contributed to this myth. The golf ball moves based on gravity and friction against the grass blade. It would fall into the hole based on those two factors.

“On a similar note, putts don’t break toward mountains or rivers off in the distance, or the Pacific Ocean at Torrey. It’s simply gravity. A left-to-right putt will head in that direction because of the slope and gravity regardless of an ocean or whatever may be in the opposite direction.”