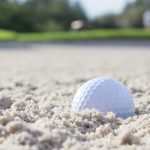 The type of sand in bunkers matters. Here's why.

Start talking turf with a superintendent and it isn’t long before you’re deep in the weeds. Sand is a similarly immersive topic; an avalanche of granular detail awaits. The most famous sand in golf is the sugar-white stuff at Augusta National, which we get to admire during Masters week.

Known in the industry as SP55, it is granulated quartz, produced in a small town in North Carolina and sold at the steep end of the price scale. Not every club can afford it. But not every club wants it, anyway.

That’s the thing about sand: there are many kinds — some light, others dark; some soft, others firm — and they vary widely in appearance and performance. How does a course decide which type is right for its bunkers? We asked Dan Dinelli, longtime superintendent at North Shore Country Club, in Glenview, Ill., for an overview of the sandy options, the key considerations in making a selection and the influence that choice can have on how a course both looks and plays.

No one wants to deal with a fried-egg lie. The probability of facing one hinges partly on the shape and size of the bunker sand. Some sand particles are round. Others are more angular, with edges and wedges that allow the particles to cling together.

Round particles, by contrast, have more space between them. They don’t readily compact. What does that mean? The rounder the sand, the softer the conditions.

Particle uniformity is another factor. Ideally, you want angular shapes of varied sizes. Dinelli compares it to a bucket of marbles. “If you have all these round objects of the same size, you can push your fist into it pretty easily,” he says. “But if you take that same bucket and put different size marbles in there, they lock up.”

It’s now harder to push your first into those marbles. The same principle applies to bunker sand: When the particles are angular and varied in size, it’s harder for the ball to bury deep.

The lifespan of sand

Over time, whether it’s from leaves, twigs, dirt or other debris, all bunkers suffer from contamination. You can see this sooner on white sand than on brown (no wonder some high-end clubs skim off a top layer of sand from their bunkers every year and sell it to other courses).

But the impact isn’t just aesthetic. It also affects how a bunker plays. Drainage can suffer, and the texture of the sand can deteriorate. A crusty algae-like layer can develop on the surface that is ugly to look at and tough to hit from. How long this takes depends on a range of factors, including climate, maintenance and volume of play. But as a general rule, Dinelli says, most bunker sand lasts roughly 15 to 20 years.

In his nearly four decades at North Shore Country Club, Dinelli has overseen two bunker renovation projects. The first time around, 20-plus years ago, the club paid $14 a ton for a local brown sand. When that sand reached the end of its life, the club replaced it with a better-draining, purer-playing silica-based white sand that cost a little more than $100 a ton.

Point is, the price of sand can vary widely (the pure white stuff is most expensive), as can the transportation costs, depending on how far you have to go to get it. For Augusta, money is no object (good luck getting them to tell you what they pay for their sand). But at many clubs, the sand they want isn’t always the sand they get, and there’s no bigger reason than the bottom line.

Tiger Woods once joked that every time he steps into a bunker at Augusta, he feels that he should slip on shades. On any course with bleached-white sand, the glare on sunny days can be close to blinding. That’s a downside of a striking, bright white look, and some clubs minimize it by adding darker sand into the mix. Another option is simply to give it time, Dinelli says, as the glare diminishes significantly once the sand weathers for a year or two.

Ask a group of golfers what they look for in their greens, and you’re apt to get a consistent answer: Most players like their putting surfaces smooth and fast. But ask about bunkers and you’ll get no such consensus. Some golfers like them fluffy. Others like them firm. Preferences vary.

And then there’s the matter of color choices. From Augusta-white to retro-brown, and many other shades along the spectrum in between, everyone has an opinion on the way to go.

“There’s just so much subjectivity involved,” Dinelli says. At the same time, he adds, “bunkers are usually the first things people comment on.” Though you can’t please all the people all of the time, superintendents try. Before his club’s most recent bunker renovation, Dinelli filled four green-side bunkers with four different kinds of sand as a season-long test run. At the end of the year, his members got to vote on which sand that they liked best.