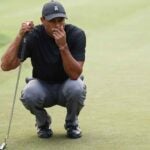 Tiger Woods has some work to do after a disappointing first round at the 2020 Zozo Championship at Shewood CC.

Tiger Woods’ highly anticipated return to competitive golf at Sherwood Country Club — a course where he’s had so much success in years past — unfortunately left much to desire on Thursday at the Zozo Championship. Woods fired a 4-over 76, which left him near the bottom of the leaderboard’s 77 players.

Woods staged his annual Hero World Challenge invitational at Sherwood from 2000-2013, and of the 14 times he competed there, Woods won five times and was runner-up an additional five times. The Zozo Championship — site of Woods’ triumphant 82nd career victory last year — moved from Japan to Sherwood on a one-year basis this year, due to Covid-19. Based on Woods’ illustrious history at the course, he was a 33/1 favorite to win this week — even though, compared to his Tour peers, he is lacking in competitive reps. Woods’ last PGA Tour event was September’s U.S. Open at Winged Foot, where he missed the cut at 10-over.

On Thursday, Woods started on No. 10, and went in the wrong direction almost right off the bat. A bogey and a double on Nos. 11 and 13 (both par-5s), respectively, put him at 3-over after only four holes. A birdie on the par-4 14th followed, but was quickly mitigated by another bogey on the par-5 16th.

Woods made the turn at 3-over, with the unfortunate distinction of having made bogey or worse on three par-5s in a single round for the first time in his career — and he still had the front side to play.

Woods settled down a bit on the front, making birdie on the par-5 2nd by draining an 8-footer, but additional bogeys followed on Nos. 4 and 8.

With the first-round leader 12 shots ahead, Woods has some work to do if he wants to get back in the mix. But the good news is that the Zozo, as a no-cut event, guarantees the Big Cat three more competitive rounds regardless of what he shoots on Friday, so his on-course prep for the Masters will continue at least as long as Sunday.