Watch Tiger Woods and his son practice together in perfect harmony 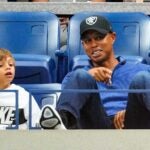 Charlie Woods takes a near full swing on a ball. Tiger Woods then takes about a half-swing on a ball. When the son completes his swing, his dad starts his. The sounds of impact sound nearly the same.

Like father, like son. Like son, like father. In a short video released earlier this month, Tiger, 15-time major champion, and Charlie, his 11-year-old son, practice side by side. So why are we bringing this up now? Because on Thursday, the elder Woods announced he and his son would be playing together in next month’s PNC Championship, which pairs top pros with family members. It’s the first time Tiger has ever played in it.

“Just Tiger and his son prepping for their forthcoming tourney!” wrote Jonathan Yarwood, a GOLF Top 100 Teacher, as he tweeted the video.

Over the past year, Tiger told GolfTV in July, Charlie has been “starting to get into it, and he’s starting to understand how to play. He’s asking me the right questions.” In August, Charlie won a junior tournament and had Tiger caddie in another.

Dad’s been a bit jealous at times, too.

“I wish I had his move,” Tiger said to Golf TV, laughing. “I analyze his swing all the time. I wish I could rotate like that and turn my head like that and do some of those positions. But those days are long gone, and I’ve got to re-live it through him.”

Tiger also, apparently, has been teaching Charlie like his dad, Earl, taught him.

At last week’s Masters, Jack Nicklaus said that Tiger is having his son practice with blade irons. Nicklaus said the move was “wise,” as Charlie is learning “how to play golf instead of learning with all those forgiving golf clubs.”

“Charlie is starting to play golf, and he’s getting a really good swing,” Nicklaus said.