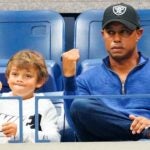 Having won 15 major championships and 82 PGA Tour wins (and counting), Tiger Woods is the last golfer you’d expect to envy someone’s else game. But one surprising player has a swing, or at least a swing move, that teases some jealousy out of Tiger: his son Charlie.

The 11-year-old has recently shown a keen interest in the game his father has spent his life trying to master. As Tiger mentioned in recent interviews, the two often tee it up together at Medalist Golf Club near their Jupiter, Fla., home, or they practice together on the swing simulator in their basement (or their backyard practice area).

In a recent interview for GolfTV, Woods offered up a few nuggets about Charlie’s growing interest in golf.

“He’s starting to get into it, and he’s starting to understand how to play. He’s asking me the right questions,” Woods said. “It’s been just an absolute blast to go out there and be with him, and it reminds me so much of me and my dad growing up.”

Then Tiger revealed the eyebrow-raising aspect of Charlie’s game that he wishes he could pull off.

“I wish I had his move,” Tiger said, laughing. “I analyze his swing all the time. I wish I could rotate like that and turn my head like that and do some of those positions. But those days are long gone, and I’ve got to re-live it through him.”

It’s safe to assume Tiger’s jealousy arises not from a lack of skill or missing funamental, but from the physical limitations imposed by his surgically-reconstructed back that prevents him from swinging the way he wants to.

To be fair, though, Tiger has done a decent job of maintaining his high level of performance in spite of injury. During his most recent return from surgery in late 2018, Woods won the 2019 Masters and collected victory No. 82 at the Zozo Championship. Not bad for a balky back.

While Tiger is all smiles right now when glowing about his son’s game, we’ll see if that smile disappears when Charlie starts beating him on the course.

Tiger returns to PGA Tour action next week at the 2020 Memorial Tournament. You can hear his complete comments about Charlie’s swing below.