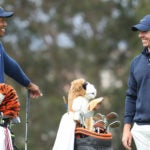 Tiger Woods and Rory McIlroy had plenty of time to chat on No. 4 tee.

If you’re a golf fan you are, almost by definition, curious about what Tiger Woods and Rory McIlroy have to say. The goal of the “Featured Groups” that have become commonplace in majors and Tour events alike is basically to satisfy these curiosities. How will golf’s biggest characters interact with each other? What will Brooks Koepka say to Jordan Spieth? Will Phil Mickelson chat with Justin Thomas? In this case, what do two generational stars talk about while they wait for the fairway to clear?

Our collective fascination for these stolen hot-mic moments has pushed golf’s rabble-rousers to call for change. For mic’d up players! For cameras everywhere! For announcers to stay quiet so we can hear the players! On Thursday’s Featured Group coverage on ESPN+, we got a little reminder why that’s so fun.

Woods, McIlroy and their third, Justin Thomas, were coming off the 3rd hole (their 12th) when they ran into a bit of a wait on No. 4 tee. Thomas, coming off double bogey, was largely silent. But McIlroy struck up a conversation with Woods by the tee. ESPN’s Matt Barrie, who was leading the coverage at that point, heard them start chatting and immediately quieted down.

We hear Woods and McIlroy at press conferences. We see them in commercials. We even get them mic’d up for the occasional exhibition. But the difference between The Match II and the 4th tee at the PGA Championship is that in this setting, neither is worried about being entertaining. As a result, what we saw was something far simpler and more insightful: they were being themselves. Add in the context — that Woods was McIlroy’s idol growing up and that they’re arguably the two most compelling figures in the sport — and you’ve got our attention.

Between golf, fanhood and trying to make sense of coronavirus predictions, it sounded very much like the sort of back-and-forth tee-box time-killer that would happen on courses across the country.

We enter the chat with McIlroy admiring Woods’ handling of a touchy bump-and-run shot from just off the green at No. 3, which he played with an iron instead of a wedge.

Rory: I’m over here trying to hit lob wedge? [Mimics hitting and stopping] I spent an hour yesterday, trying to figure out what to do with that cut.

Tiger: It all depends on if it’s down-grain or into the grain.

Rory: Yeah, but like every one has been sitting a little cuppy and it’s just so hard …

Rory: … I haven’t seen one down-grain yet. [Grabs wedge, points to top of the face.] I just look at the clubface and there’s just a nice little patch of grass…

Tiger: I couldn’t do it.

Tiger: What team do you root for? Back home, in soccer?

Rory: Man United. So Liverpool are like, the biggest rivals.

Tiger: So that’d be like Liverpool f—– colors on your bag. That’s how much we hate the Giants.

Tiger: Yeah. Wouldn’t do it!

Rory: Are you cheering for the Vegas … the Raiders now in Vegas?

Tiger: They’re just the Raiders. I grew up and they were Oakland, and then they moved to L.A., and I watched them win two Super Bowls in L.A., and they went back to Oakland, now they’re Vegas. So they’ve always just been the Raiders to me.

Rory: Okay, just the Raiders. It looks like a cool stadium. It looks really cool.

Tiger: IF you have football. If.

Rory: I can’t see it in this state. I mean, with how — they’re super strict.

Tiger: Once one person has it in a locker room? They’re all going to get it.

Tiger: If they have one more outbreak on any team, they’re done.

Then, just like that, it was back to business as usual. McIlroy re-conferred with caddie Harry Diamond. Woods huddled up with LaCava. Off they went down the par-5 4th.

“As the host of this program, I just hope they don’t find out about the microphones, because that was incredibly entertaining,” Barrie said after the exchange.

We’d be inclined to agree.