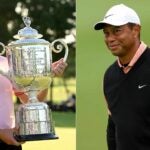 Justin Thomas won the PGA Championship on Sunday but Tiger Woods was no longer on property.

New PGA champion Justin Thomas, along with his pal Tiger Woods, are now the answers to a trivia question. The last two winners at Southern Hills majors? Woods and Thomas.

“I think now I only have like 150 other things to do that he’s done to where he can stop giving me grief,” Thomas joked on Sunday night. “So I guess it’s just a steppingstone.”

That’s kind of the relationship Woods and Thomas have. Sure, Woods congratulated him on Twitter on Sunday night, but those two rarely turn down an opportunity to tease the other. (Even Woods’ son, Charlie, gets in on it.) So Woods didn’t miss a golden opportunity this week.

The 15-time major champ wasn’t there on Sunday to congratulate Thomas in person. He made the cut, but he withdrew after his third-round 79 on Saturday. In his winner’s press conference on Sunday evening, Thomas said he talked to Woods a little on Saturday night. Thomas had just shot 74 and was now seven off the lead, but it didn’t sound like Woods gave him much of a pep talk. (At least, not like the one Bones did.)

Thomas said he asked how Woods was feeling. You know, because of his injuries and the WD and all of that. A sincere question, right? Woods took it and used it to jab Thomas.

“He just said he was feeling terrible because my name kept dropping on the leaderboard,” said Thomas, before smirking. “So I was like, ‘Thanks, good to talk to you too, I’ll talk to you later.'”

Joking aside, Thomas, who now has two major titles, emphasized how unbelievable it was that Woods simply made the cut in both the Masters and PGA, his only two starts since his February 2021 car accident.

“I didn’t play during his prime, but from the times I’ve been out here and him winning the Masters in ’19 and winning the Tour Championship [in 2018], him making the cut these last two tournaments with the condition he was in last year, it’s absurd,” he said. “Like, beyond absurd.”

Thomas said he hadn’t talked to him prior to his winner’s press conference on Sunday night, but he already knew what might be coming.

“I’m sure he probably will give me a hard time for shanking it,” Thomas said. “I should have made the putt on 18. Shouldn’t have been in a playoff. I don’t know, he’ll always find something to give me grief about.”