These viral patrons on No. 16 at Augusta National are a Masters tradition 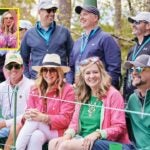 Augusta, Ga. – The Masters is the home of traditions. From the Champions Dinner to honorary starters to the par-3 contest, these traditions help time stand still on the grounds of Augusta National. The more things change outside these gates, the more they stay the same within. For the Brown family, a tradition lives on behind the 16th tee box that makes them one of the most televised Masters patrons.

On Friday, Lindsay and Laurie Brown could be seen celebrating Stewart Cink’s ace on No. 16. It’s hard to miss their floral get-ups. Did those faces look familiar? Because they should.

In 2019, the golf world was introduced to Lindsay and the Brown family and they didn’t even know it. Remember when Tiger Woods stuck his tee shot on No. 16 to help secure his Masters victory with Michael Phelps in the background? Leaning over the ropes to intently track the ball flight. Well, seen just to the right are Lindsay and her husband, Chip.

“A mutual friend who knows we sit behind the 16th tee box every year reached out to ask if we would help save Michael a seat,” said Lindsay. “When he arrived he simply asked, ‘are you Lindsay?’ and he plopped down in the spot we had saved for him. He was an absolute joy to sit with. One thing we got a kick out of with Phelps is that he refers to Tiger as only ‘ger’ and would say ‘Let’s go ger!”

This went on to become one of the most viral moments from the 2019 Masters. Lindsay could be seen prominently in every frame with two of sports’ biggest icons.

“When I returned to my cell phone later that day, I had over 100 messages from people watching at home,” said Lindsay. “We went out in Augusta that night wearing our same clothes and it was CRAZY – tons of people came up to ask to take a picture with us, and even autographs. I’m typically approached several times a day now during tournament days”

Phelps sent the Browns a photo of their viral moment together signed by himself and Tiger. Outside of Tiger’s green jacket, that might one of the most prized possessions from the 2019 Masters.

“I have that photo hanging in my office and I look at it every day,” said Phelps to GOLF.com. “Lindsay and her family have a tradition that’s unlike any other. That seat, coming down the stretch at Augusta, there’s nothing better than that. Being there with the Browns was pretty insane. The patrons at Augusta give more respect to the competitors because they are there to watch, without phones, and take part in history at a place of history. I’ve been there one time and I can’t wait to go back.”

But for the Brown family, from Rome, Georgia, this Masters tradition started 37 years earlier. Chip and his sister Laurie’s father had acquired tickets in 1972. This was pre-lottery when holding a ticket badge was the equivalent of a season ticket to your favorite sports team. Once you have a patron badge, it’s yours for life and the Browns now possess legacy tickets.

In 1990, Laurie’s birthday present was to go along with the family for her first Masters. Between the years 1990 and 2001, a combination of Chip and Laurie with family and friends would put the patron badges to good use.

“The one chair per-patron rule hadn’t gone into effect yet,” said Laurie. “In those days we used to plant seats at various spots throughout the course for ourselves to use. It’s more about finding the best views and less about being picked up by cameras. Those happen to go hand-in-hand when it comes to No. 16.”

Laurie is protective of this family tradition. Her boyfriend, Christian Baits, had to sit on the sidelines before being embraced.

“I waited four and a half years of dating before bringing Christian with us,” said Laurie. “It’s a big deal to be invited into our family tradition.”

Chip and Lindsay met in 2002 while attending graduate school. In 2003, the two began dating and Lindsay was brought into the Brown Masters family tradition. The two married in 2006 to give her the Brown namesake.

In 2004, Chip and Lindsay were seated in the grandstands on 16 when a volunteer pointed out a coveted open spot behind the tee box. The two were grateful for the recommendation and jumped on the opportunity. As fate would have it, Padraig Harrington and Kirk Triplett made aces in back-to-back groups that same year.

The two were hooked, and the family found a new home base among a slew of other regularly returning patrons.

“It’s an amazing place to watch golf,” said Lindsay. “It’s a family atmosphere with all the time we spend together (technology free!), with other families who love 16 that we see each year, and with all those who work on and around that hole that we have come to know well throughout the years.”

If you hang around the 16th tee area to watch a few groups tee off, you’ll notice more than a few people swing by from inside and outside the ropes to say hi to the Browns. These are security guards, volunteers, and broadcast crew members. Lindsay frequently is stopped at the concession areas by patrons who take a few moments to realize where they recognize her from.

The Browns rent a house and bring their kids to make the Masters an annual family vacation. After missing the last two Masters due to COVID restrictions, this year is serving as an extended family vacation as they are once again surrounded by their regular congregation. Even their pastor, Tony Sundermeier, is on hand this year standing right behind the Browns’ chairs.

They are familiar faces to more than those sitting around them. Chip was a teammate and roommate of Matt Kuchar at Georgia Tech. The two were members of the 1999 ACC Championship team together. They remain friends today, and the Brown children can always expect a treat from Kuchar when he arrives on the tee.

While Chip’s competitive playing days ended at the collegiate level, he has played Augusta National several times. The most memorable round came with his father, the man responsible for starting this family Masters tradition.

Lindsay’s viral stardom goes well beyond the Augusta area. She’s big in Japan. Seriously. Die-hard fans of Hideki Matsuyama and Collin Morikawa routinely stop by to visit Lindsay behind the 16th tee each year. They exchange pleasantries and have even brought her gifts since establishing these friendships. They don’t mind receiving a few minutes of broadcast airtime during their visits either.

With this small slice of fame comes preparation. There’s a lot that goes into an outing knowing millions of viewers at home will potentially see you at any given moment.

“So much goes into this,” said Lindsay. “We like colorful spring attire. We have outfits for putting chairs down, outfits for daytime at the course, and outfits for going out at night. Practical shoes for pine straw and mud. Bright colors fit in with Masters vibe and look good on TV. We start planning and packing about a month before the tournament but shopping for potential outfit options is a year-round event. We also have 25+ years of Masters swag to sort through and prioritize with outfits.”

The Browns are a true golf family. They know the game, respect its history and live to celebrate it. That’s a common theme among this family and patrons at Augusta National. It’s not lost on them what this week means for more than those competing. They also have a sense of humor regarding their internet fame. Whenever something exciting happens in their lives, Chip and Lindsay send each other a GIF of the ’19 Masters celebration featured on the broadcast

Lindsay has become the de facto internet face of the family, but this is a true family affair. She knows it started well before her and is one she hopes to help carry on.

“We are a golf family to our core ⁠— and the Masters is our reunion spot every year no matter where we are living or working or studying over the decades,” said Lindsay. “And we hope it always will be.”