What Tiger Woods noticed re-watching the Masters (including Michael Phelps!) 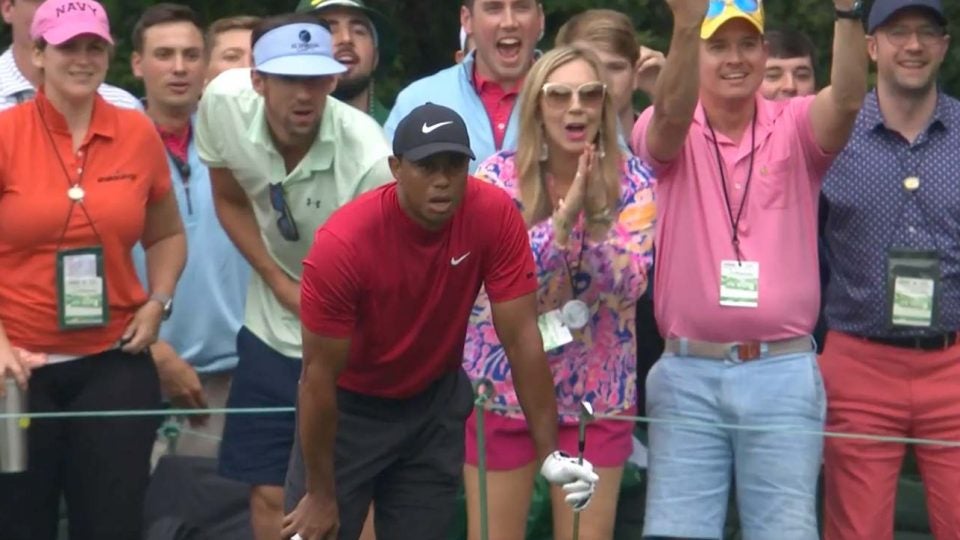 Tiger Woods and Michael Phelps stared down Woods' tee shot at No. 16 on Masters Sunday.

As Tiger Woods walked to the 16th tee on Sunday at the 2019 Masters, he didn’t see anything. Not his reeling opponents. Not the crowd around him. Not even the most decorated champion in the history of the Olympic Games.

“I was locked into what I was doing,” Woods told reporters on Tuesday. “I had just taken the lead on 15 and was just trying to figure out, am I going to — I already had an idea if it was going to be 7 or 8 [iron], and that’s what I kept thinking and reminding myself that, hey, I’ve got to be committed to either shot.”

“But no, I did not know who was there, and to see the reaction, to see Verne [Lundquist] call it and to see Michael, basically, bending over in the same position that I was in leaning forward, that was pretty cool.”

Woods’ comments here are revealing in two ways. First, that he was in the zone enough not to recognize Phelps, one of the more recognizable figures in the sports world. Second, that he really noticed later, to the extent that he remembered how Phelps looked in a screenshot from the broadcast, the one from the top of this article. It was a reminder that he often knows more than we think.

It wasn’t until at least a month after the Masters, though, that Woods finally watched the broadcast. “Joey [LaCava] came down and we watched it together,” he said. “We were talking back and forth, and reliving every bit of it. Because we have a certain viewpoint of how we look at it, the shots, the numbers, the situations, and people are making birdies and all the different scenarios were playing out in our heads.”

In the past, Woods has likened the difference to watching a football game from the sidelines versus calling plays from the booth. You get different context. The twists, the turns, the lead changes — it’s impossible to catalog in real time from within one of those final groups. Woods enjoyed the exercise.

“It was kind of fun to sit back and listen to the broadcast and hear their take on it. You know, what we don’t have access to is what people are — how they are doing it in front of us, and you know, we hear the roars. We hear the birdies that were being made. We have the signage that people pop up and what they have done; we just don’t know how they did it.

“That was kind of the fun part is reliving that from a totally different perspective than what we did.”

Woods watched more than just the broadcast, he said. He was inundated with emails and texts, but said that what he was most shocked by were the videos of other people watching his win. That sort of thing didn’t exist the last time he won this event.

Woods was jovial and energetic throughout the call with reporters (as he should be — who wouldn’t want to reflect on a Masters win?!). It was a marked contrast to the wearied golfer who finished 68th at the Genesis Open nine days ago, and he reminded everyone to keep their eyes on the prize, like he has been. His title defense at Augusta National has been top of mind since his Presidents Cup duties wrapped up in December, he said. Now that it’s drawing closer, he’s gearing up.

“It’s hard to try and get all the shots and have everything dialed in,” he said. “But I’ve been a part of the Masters since I was 19 years old, and it doesn’t cease to amaze me when I go back to Augusta National, just the beauty and the history and the aura around it, it’s just unlike anything that we have in our sport.”