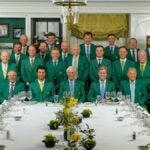 The club inside the club: the 2022 Champions Dinner.

AUGUSTA, Ga. — Even before the coterie of past Masters winners congregated in the Augusta National clubhouse Tuesday night for the annual Champions Dinner, there was much buzz about the affair.

In the previous two years, Covid precautions had forced the gathering into the more spacious Founders Room; but this year, the boys returned to their cozier, clubbier quarters upstairs. Five-time Tiger Woods was back in the fold, too, having missed the 2021 edition in the wake of his car accident. And then there was the tantalizing menu, handpicked by the defending champion, Hideki Matsuyama.

“I’m going to have seconds of all of it,” Jordan Spieth, the 2016 champion, said Tuesday afternoon. “I played the Dunlop Phoenix, in Miyazaki, back in 2014, and I might make a lot of people mad in the state of Texas, but it’s the best beef I’ve ever had. … I had no idea what route [Matsuyama] was going to go, and I’m excited to shake his hand and say thank you at the end of the night.”

On Tuesday evening, 31 past champions, smartly clad in their green coats, assembled for what is one of the most storied traditions in sports. The club inside the club. Mize and O’Meara. Sandy and Scotty. Craig Stadler, looking marvelous in a yellow shirt and green necktie. Freddie, dapper as ever. Tommy Aaron, 85 years old and still going strong. All squeezed shoulder to shoulder around a rectangular table with a floral centerpiece.

And the meal! Oh, that meal! Jordan was right. The chefs hit every note.

“Probably the best we ever had,” Jack Nicklaus said Thursday morning.

The six-time winner was speaking of the food, but also so much more. The stories. The camaraderie. The composure of the reigning champion.

Matsuyama sat at the head of the table flanked by the dinner’s resident host, two-time champion Ben Crenshaw, and Augusta National chairman Fred Ridley. It is customary for the previous year’s winner to say a few words, and you couldn’t blame Matsuyama if that task made him sweat. He speaks some English but prefers to use his native tongue when addressing large groups or speaking in press conferences.

But on this occasion, Matsuyama wanted to address his fellow champions in English. Tom Watson, seated across the table, noticed Matsuyama’s eyes shifting and hands fidgeting. “I could tell he was very nervous,” Watson said.

Matsuyama’s dinner mates were in awe. When he finished, Jack, Faldo, Bubba, Vijay, Sergio — all of them — rose to their feet in unison and applauded. Gary Player went a step further, sliding up to Matsuyama and speaking to him in Japanese, which Player had learned on his many visits to Japan. Player could remember how he had felt at his own first Champions Dinner, in 1962, where he was seated next to Ben Hogan. Player said he was petrified. By speaking to Matsuyama in his native tongue, Player said he was trying to make Matsuyama feel at home.

“We were all just blown away,” Mike Weir, the 2003 winner, said of Player’s gesture. “I guess he used to play quite a bit in Japan in his early days, so that was really cool to watch him do that.”

Nicklaus played his own starring role at the table. With some prodding from Watson, the Golden Bear regaled the room with tales of his legendary win from 1986.

“Do you want me to go shot by shot?” Nicklaus said, half-joking

Overkill? Please. Not when the Masters GOAT is holding court. And so Nicklaus dutifully reeled off his insights and highlights from that magical Sunday. One champion dispensing his wisdom to 30 others.

“I was looking around the table, the guys at the table [makes jaw drop gesture] — they wanted to hear, because everybody at that table had been in that position before, winning the tournament,” Watson said. “And you could understand they wanted to hear what Jack was thinking as he played the last nine holes.”

Almost as good as the sashimi.