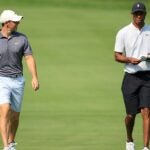 Tiger Woods and Rory McIlroy play a practice round at the BMW Championship on the same day the pair announced they would play in a charity event alongside Justin Thomas and Justin Rose.

The PGA Tour has returned in full, but that didn’t stop four of golf’s biggest names for scheduling a charity match in the vein of The Match II and TaylorMade Driving Relief events contested before the restart.

Tiger Woods, Justin Thomas, Rory McIlroy and Justin Rose announced they will take part in the “Payne’s Valley Cup” to benefit the Payne Stewart Family Foundation. The charity event will be played the Tuesday after the U.S. Open and will showcase the Tiger-designed Payne’s Valley golf course.

“Payne’s Valley is the first public golf course that I have designed. I couldn’t be prouder of how it turned out,” Woods said in a statement to media Wednesday. “It was an honor for me and my TGR Design team to work with Johnny Morris and Big Cedar Lodge on this spectacular golf course. I am thrilled that it will be featured during the Payne’s Valley Cup.”

Thomas, Woods, McIlroy and Rose will spotlight Payne’s Valley’s television debut. The 19-hole course (yes — you read that correctly) is located at Big Cedar Lodge in Missouri’s Ozarks and is one of ten courses currently in development by Woods’ architecture firm, TGR Design.

While the length of the match has yet to be announced, it’s likely we’ll also get our first look at Payne’s Valley’s 19th hole. The bonus-hole par-3 supposedly involves a natural cave system and cliff-hanging nature trail.

Here’s what the TGR website says about the 19th hole:

“The world-class course will conclude on the spectacular 19th hole designed by Johnny Morris, Bass Pro Shops and Big Cedar Lodge Founder. The striking par-3 hole plays to an island green surrounded by streams and waterfalls flowing down exposed rock walls to close the round.”

You can check out a preview video for the course, which is named for Ozark-native Payne Stewart, below.

The Payne’s Valley Cup event will pit the two Americans (Thomas and Woods) against the two Europeans (McIlroy and Rose) on what would have been Ryder Cup week. NBC Sports will carry live coverage of the Sept. 22 event on Golf Channel and will air an encore version of the broadcast on NBC on Dec. 26 and 27.

Proceeds from the event will go toward the Payne Stewart Family Foundation, which supports golf-forward charities such as Kids Across America, the AJGA, and The First Tee.

Other details for the match have yet to be announced.