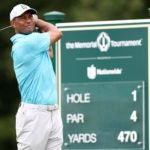 Tiger Woods got off to a clinical start on Thursday.

When it comes to writing about golf, it’s easy to fall into the trap of overanalyzing everything that Tiger Woods does. It’s also plenty fun, though! No need to turn back now.

With that in mind, let’s consider Tiger’s first hole at the Memorial, his first competitive round since the PGA Tour’s restart. I’ll lead with the spoiler: He made birdie. But here are 10 things we know for sure after watching Woods play just three shots.

Woods wore mostly blade-collared Nike shirts in 2019, plus the notable mock-neck red he wore in capturing the Masters title. He went blade collar at The Match II, too. This week? Looks like we’re back to a traditional collar. As for the color? We’ll call Thursday’s selection somewhere between “sky blue” and “seafoam green.”

2. It’s especially weird having no fans when Tiger’s involved.

Hearing Woods’ name simply announced — and no applause following — was jarring. We’d better get used to it, though.

Golf Channel’s Tiger Tracker account estimated 50-75 people on hand to witness his first hole. That’s hardly on par with the thousands who would typically watch him play, but it’s a lot more than zero, too.

Downwind off Muirfield Village’s 1st tee, there’s a temptation to chase the right bunkers, which are some 320 yards to carry in order to make the hole that much shorter. Bryson DeChambeau hit driver 423 yards (!) about an hour earlier. Woods? He pulled 3-wood. Managing the course.

5. Whatever 1st-tee nerves he had, he controlled.

Woods has always insisted that he still gets nervous on every 1st tee, but that didn’t seem to be an issue as he found the center stripe off No. 1.

6. Bryson ain’t the only one who can move it.

You could see it when Woods stood over his approach shot — the trees were going wild in the distance. Last week’s Workday at Muirfield Village was fun, but this week? Firmer course, higher wind, tougher conditions? This week should be awesome.

8. That iron swing? Just the way you remembered.

Woods’ approach shot was perfection — a pin-seeker to a back hole location on a blustery Ohio summer afternoon. After nearly hitting the flagstick on the way by, he was left with 10 feet for birdie.

That look that he gave when his birdie putt fell in the center? Pure business. No smile. Head down. Minimal wave to the minimal crowd. Woods is here to game this week.

10. Tiger Woods makes everything in golf that much more exciting.