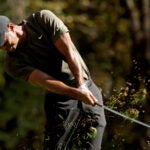 Tiger Woods hits a shot on the 11th hole at Augusta National Golf Club on Thursday.

Neither would likely win it this week, according to one of Woods’ former coaches.

Neither would likely play on the weekend, either.

“I don’t think he’ll make the cut. Look how bad he played in Houston,” Butch Harmon said of Mickelson on Wednesday. Harmon was speaking on an Instagram Live video to his son and fellow coach, Claude Harmon III.

“I think Phil and Tiger are both going to struggle to make the cut,” Butch continued. “I want to see him do it. I love to see Tiger get in the hunt, but I’m not sure his body is good enough to let that happen. I’m worried about DJ (Dustin Johnson), and I’m worried about Brooks (Koepka) just walking there because both of them have had health problems and stuff.” Woods, since the PGA Tour’s restart in mid-June, has played in six events and has finished no better than a tie for 37th, at the PGA Championship in mid-August, the year’s first major. Woods has also missed a cut. Mickelson, since the restart, has played in 11 events. He tied for second at the FedEx St. Jude Invitational the week before the PGA and has also won his first two Champions Tour events, but he’s also missed four cuts, including last week in Houston.

Woods, too, has battled back pain, while Mickelson recently turned 50. And the Augusta National Golf Club isn’t getting any less hilly, Butch Harmon said.

“That’s a hard walk,” he said. “That’s a very tough walk, especially going up some of those hills, like going up No. 8, man.”

“Of course, if you’re hitting driver, 7-iron into 8 like DeChambeau did the other day, it makes it a little easier to walk, but still,” Butch added, referring to one of DeChambeau’s Augusta practice rounds.

“No one is talking about Webb Simpson,” he said. “He and Jon Rahm are probably the two most consistent players on Tour. Webb is a really good ball striker and guess what he can do: He can really putt.”