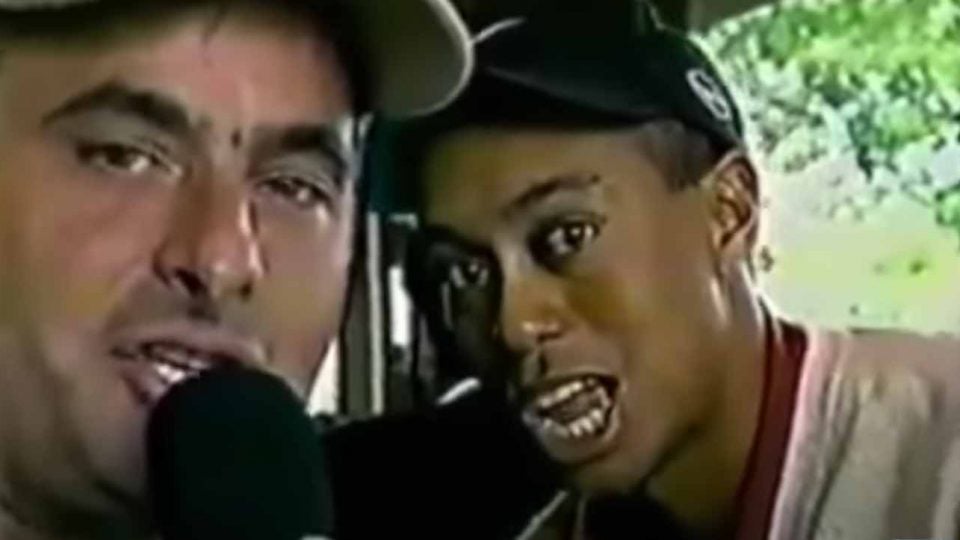 Tiger Woods and David Feherty during a rain delay at the Memorial in 2000.

Welcome back to the Tiger Woods YouTube Project! In today’s episode, GOLF equipment godfather Jonathan Wall steps in to break down a fascinating Woods interview at a particularly pivotal point in his gear career.

There’s a saying often attributed to Eleanor Roosevelt that goes something like this: “Today is the oldest you’ve ever been, and the youngest you’ll ever be again.” I think it’s about seizing the day, or contextualizing your existence — or something like that. But since this is the Tiger Woods YouTube Project, it’s his existence we’re contextualizing, on one day in June 2000.

Why the trite quote on the outset? Because the Tiger Woods we see in the clip below is distinctly different than the guy we’ve seen in his first 23 years of life, but he’s also notably younger than the guy we’ll get used to in the years that follow. It’s a snapshot. Tiger Woods at one single moment in time.

You’ll see what I mean.

DYLAN DETHIER: Jonathan, what the hell is going on in this interview? We’re in a rain delay at the Memorial. We’re inside the clubhouse. We’ve got young Feherty. We’ve got Tiger, who’s alternating between different personalities, it seems like. Give me your five favorite non-equipment-related moments from this brief interview.

JONATHAN WALL: Where to begin…

1. The reminder that Tiger Woods once had a logo (side of hat) that made absolutely no sense. Is it two shark fins? A ninja star? We’ll never know. 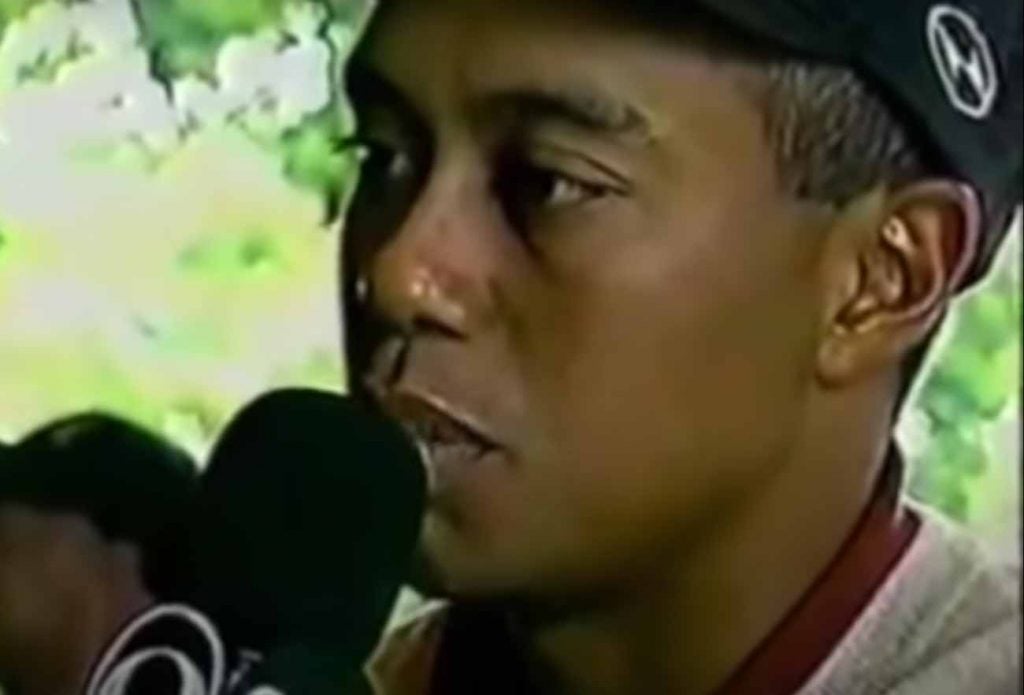 What was the deal with Tiger Woods' old logo?

2. I love the part where Tiger provides rain delay color. Notice how he doesn’t say anything about tapping away on his cell phone to kill the time? Guys were telling stories and playing cards in 2000. Real face-to-face interactions. I miss those days.

3. Two of the Tour’s class clowns, Paul Azinger and Peter Jacobsen, are yukking it up hard for the camera. This doesn’t surprise me. 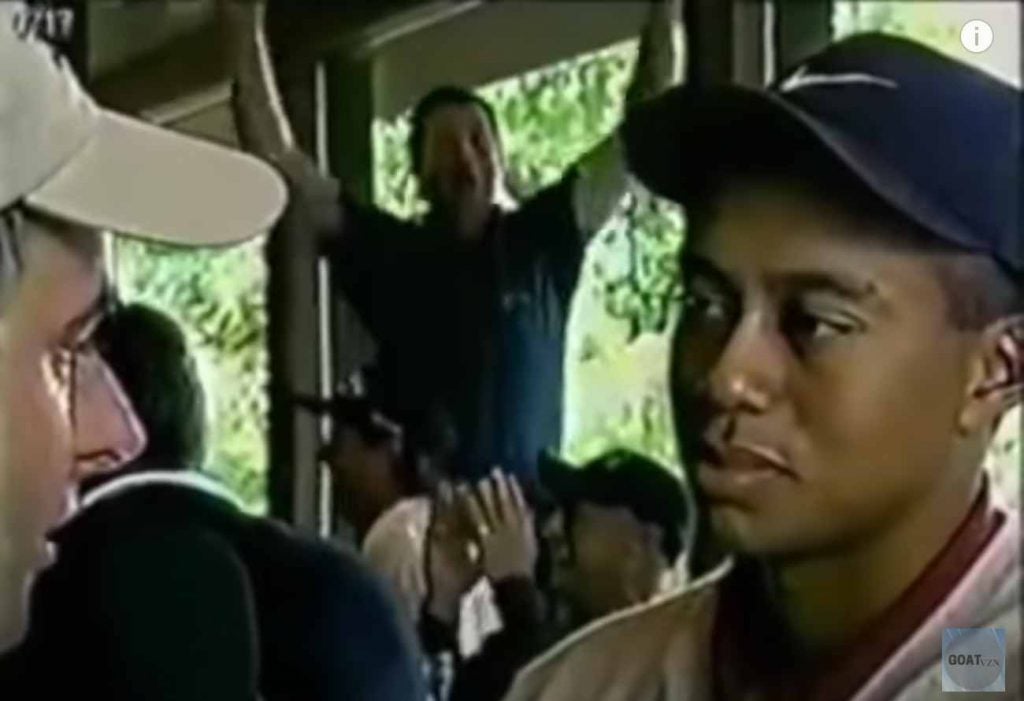 Woods and Feherty, with Peter Jacobsen in the back ground.

4. I completely forgot David Feherty was clean-shaven at one point. The beard is a much better look.

5. Tiger Woods is a ruthless assassin who lives to crush the will of his opponents. But for a fleeting second, you see his fun-loving side as he makes a silly face and points in Feherty’s direction. It’s like seeing Big Foot in the wild. You know this side of Tiger exists, but we rarely see it outside of paid commercial shoots.

DETHIER: Now, the reason I brought you in for THIS interview in particular is so you might be able to give some insight into what Feherty’s question about the golf ball refers to. What did it mean for Tiger’s equipment deals? What’s the new technology involved there? Explain to me — like I’m 5 — what on earth is going on there.

WALL: This was certainly a turning point for Tiger’s equipment. In 2000, Tiger is the face of Nike Golf, but his current deal only extends into the apparel space. The clubs and ball still belong to Titleist — for the moment. As Woods mentions during the interview, he’s been working with Nike on a new prototype golf ball called the Tour Accuracy. This ball is markedly different from the Titleist Professional he was playing at the time.

For starters, the Professional has a liquid-filled core (the liquid is a mix of corn syrup and salt water) that’s encased by tightly-wound rubber bands and finished off with a buttery-soft cover. It’s a great ball for the times, but for players with Woods’ speed — and there aren’t many — too much spin is sometimes an issue. To cut down on spin and generate more ball speed, Nike (and Bridgestone, who’s making Woods’ ball) replaces the liquid core with a molder rubber version injected with synthetic materials. The soft cover is also replaced by a multilayer urethane that’s more durable and firm, but doesn’t skimp on feel. The whole package helps Tiger drop spin, increase speed and gain a penetrating launch. That’s one hell of a combination.

News
Which events will Tiger Woods play in the revised PGA Tour schedule?

DETHIER: In the golf ball landscape, are we seeing a significant moment of change, crystallized right here?

WALL: I’d say this video represents the infancy stages. Tiger wasn’t the first player to put solid construction ball technology on the map. Nick Price and Mark O’Meara deserve a lot of credit for being ahead of the curve. But neither had Woods’ cache, which is why many look at him as the torchbearer for the seismic shift to solid construction. What’s crazy is Woods actually switched to Tour Accuracy the week prior to the Memorial in Hamburg, Germany, so he’s learning to trust the ball in a game situation. In typical Tiger fashion, he still goes on to win at Jack’s place by five shots.

Once Tiger lapped the field at the 2000 U.S. Open, everyone realized they were a step behind in the ball technology department. Tiger was already the best in the world by a wide margin, but he was now playing with a ball that appeared to have it all. It’s like giving Thor two hammers.

Tiger’s switch to solid construction, coupled with Titleist’s introduction of the Pro V1 at the end of 2000, ended the run of liquid-filled, wound construction balls on Tour. At the 2000 Masters, 59 of the 95 players were using a wound ball. The following year, when Woods won the “Tiger Slam” with Tour Accuracy, all but four players in the field used a solid-core ball.

DETHIER: Wow, I’ve never understood that as well as I do right this moment. Did you learn or remember anything new about Tiger re-watching this interview?

WALL: I’ve written a lot about Tiger and his gear over the years — to the point that very little really surprises me anymore. But I will say the part where he mentions that “Titleist has been nice enough to let me try [the Nike ball], let me experiment with it,” stood out. Few probably remember that Nike and Titleist were in a heated conflict at the time over two Swoosh commercials involving Woods: the iconic clip where he’s bouncing a ball on his wedge, and another where a bunch of hackers suddenly start bombing driver the moment he shows up on the range.

The Tour Accuracy wasn’t even in the marketplace at the time, but Titleist contended Nike was using Woods to promote golf balls. In the end, Titleist reworked its deal with Woods so that he was only paid when he used the company’s gear in tournaments. This was the beginning of the end for Woods and Titleist. Woods’ comments make you believe Titleist was OK with him testing another brand’s golf ball. That was never the case.