Which events will Tiger Woods play in the revised PGA Tour schedule?

The PGA Tour announced the much-anticipated revised schedule for the 2019-20 PGA Tour season on Thursday, which means golf fans may get to see Tiger Woods and friends battling it out on Tour sooner rather than later.

The season has been greatly impacted by the coronavirus pandemic so far, with all play being suspended following the first round of the Players Championship in early March. But if all goes well from here on out, the layoff will officially be in the rearview and tournaments will resume in June with the Charles Schwab Challenge at Colonial Country Club, one of nine events added to the new schedule on Thursday.

Many fans will be more than a little interested in which tournaments Woods will choose to play. The question is a complicated one with many different moving parts, and Tiger has yet to utter a peep about his plans. But we decided to take a shot at predicting the 15-time major champ’s schedule for the remainder of the year anyway. Here goes nothing.

While the season re-start is the latest news to drop in pro golf, another development from last week has greater implications for Tiger’s new schedule. Last week golf’s governing bodies announced a revised plan for the 2020 major championships. The plan is to play five tournaments in a row beginning with the PGA Championship at TPC Harding Park and ending with the Tour Championship on Sept. 7. Players will then get just one week off before playing the U.S. Open and Ryder Cup back-to-back, with the Masters coming more than a month later on Nov. 12-15.

The season-ending run alone is a tall task for the 43-year-old Woods and his battered body (remember, he missed the Players due to injury), and that’s before we even talk about the new tournaments that have been added to the schedule. One thing is for sure, whatever Tiger ends up doing, his considerations begin and end with two things: the majors and his body. 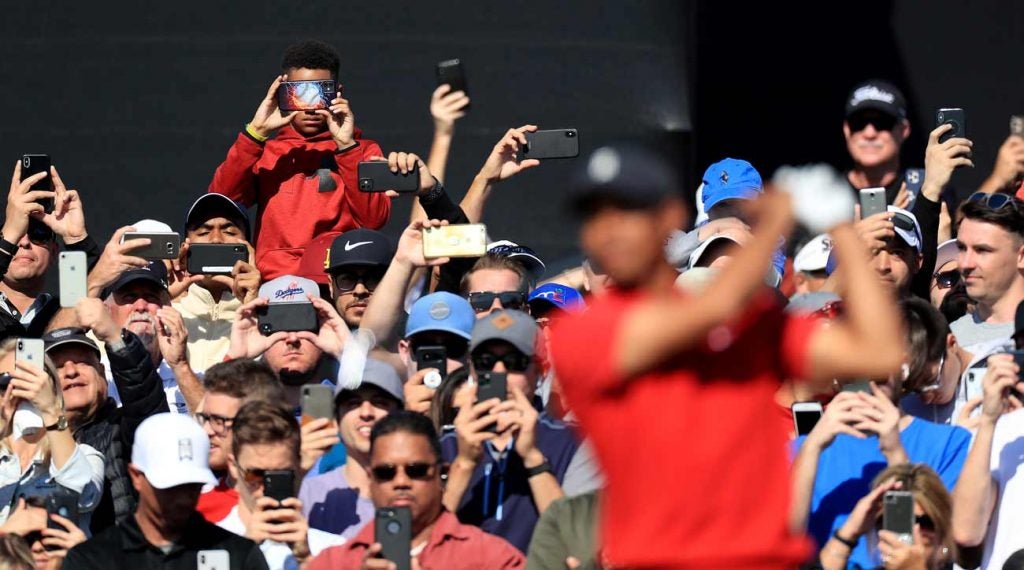 Golf fans might see a lot of Tiger Woods on the course in 2020.
Getty Images

Here’s a look at the full expected Tour schedule before we start picking and choosing which tournaments Tiger will play:

With the demanding FedEx Cup Playoff and major schedule closing out the year, it’s likely that Tiger will choose to limit the amount of events he plays in the first half of the revised season in order to keep his body in shape for the big events. The only tournament before August you can almost guarantee a Tiger appearance is the Memorial Tournament July 16-19. Not only is it one of the premier regular-season events on Tour, it’s also Jack Nicklaus’ event, and Tiger has won it a record five times. If his back is feeling well enough, he’ll be at Muirfield.

Though Woods rarely plays the annual tournament at Colonial, this is not a normal year. The Charles Schwab Challenge could represent the first major sporting event since the pandemic began, so the hype will be off the charts (especially if there aren’t any fans in the grandstands). It’s hard to imagine Woods missing out on this unique moment in sports history, and his body will be in great shape after months of rest. So you can expect to see him teeing it up in Texas in June.

The rest of the summer schedule is difficult to predict, because none of the events yet discussed are normal stops for Tiger. So here’s where the speculation truly begins. In terms of Tiger’s determining factors in this stretch, the prestige of a particular event won’t play as big a role as its spot on the schedule. He won’t play back-to-back weeks, so the RGC Heritage is out. He’ll likely be a no-show at the Travelers the following week, too.

Instead, I predict Tiger will make a surprise appearance at the second-annual Rocket Mortgage Classic in Detroit. That will allow him to get some reps in while still leaving him a week of rest before the Memorial. From there, Woods will probably shut it down until the major stretch begins. The WGC-FedEx St. Jude Invitational will be played July 30-Aug. 2, and though Tiger is a regular at WGCs, it’s a week before the PGA, and he has no history at this newer WGC event, so expect him to skip it and fly to San Francisco early.

Things gets really interesting following the first major of the year. There’s no way he goes to the regular-season-ending Wyndham Championship, but the FedEx Cup Playoffs arrive over the next three weeks. This will be a crucial decision for Tiger’s year. Playing three weeks in a row is nearly unthinkable for Tiger these days. Will he choose to skip the Playoffs altogether?

The decision might be made for him. Given his limited number of starts this year, and his relatively mediocre performance in the few events he did play (save for his win at the Zozo Championshp in October), he might not qualify for all the Playoff events. He’s currently ranked 28th in the standings, good enough to waylay for all three, but there’s a good chance he drops in the standings before the Playoffs begin.

My guess? First, he’ll qualify and play in the first two events, the Northern Trust on Aug. 27-30 and the BMW Championship Aug. 27-30. Then, he’ll either be knocked out or make the difficult decision to skip the Tour Championship.

Skipping the season finale might draw a lot of criticism, but doing so would give him plenty of time to rest for the U.S. Open at Winged Foot Sept. 17-20 and the Ryder Cup the following week, which you can bet he still fully intends to compete in.

Here’s how our new schedule for Tiger looks:

If these predictions turn out to be correct, Woods will compete in nine events in all, including the Ryder Cup, to close out the abridged 2019-20 PGA Tour season. While that’s a lot less Tiger action than fans would have been treated to in a normal year, it’s still far more than many expected just a few weeks ago. And as long as he gets a chance to defend his fifth Masters title at Augusta this fall, most golf fans will be more than satisfied.