Tiger Woods taking a cart on the PGA Tour? He had a strong opinion on the matter. 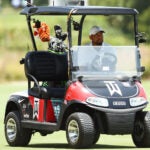 Tiger Woods behind the wheel in 2020.

Tiger Woods is back hitting bombs, making birdies and generally having a grand old time on the golf course again.

It was such a joy to watch him and his son Charlie make their way around the Ritz-Carlton Orlando course during the PNC Championship pro-am Friday that it almost made you forget that the elder Woods still has a steep hill to ascend before he’s ready to walk 18 holes again, let alone walk four-plus rounds on a 7,300-yard PGA Tour setup.

“It’s going to be a while,” Woods said after his round in which he and Charlie shared a cart. “I couldn’t walk this golf course even right now, and it’s flat. I don’t have the endurance. My leg is not quite right yet and it’s going to take time. I told you in the Bahamas, I’m a long way from playing tournament golf. This is hit, hop in a cart and move about my business just like I would at Medalist. Being able to play tournament golf and being able to recover, practice and train and hit balls after a round and do all of the things that I need to be at a high level, I’m a long way away from that.”

The pessimistic take is that it’s possible that Woods never gets all the back to being able to play PGA Tour events — that is, at least not without the use of a cart.

Might a cart be made available to him? Under the Americans with Disabilities Act, yes, it’s a possibility. Woods would need to file an official request with the Tour for a set of wheels and make a strong medical case for it, just as Casey Martin did in 2001, when he successfully sued the PGA Tour for denying him a cart. More recently, John Daly, who has osteoarthritis in his knee, was granted permission, albeit by the PGA of America, to take a cart in the PGA Championship.

So, what about it? If Woods’ recovery doesn’t progress as he hopes, would he consider applying for cart usage on the PGA Tour?

That’s not who I am. It was an unwavering response and perhaps not surprising to hear from a golfer who has a nose for the history and traditions of the game, not to mention athletic pride oozing out of every pore. This week, though? This week is different, Woods said. Without carts, many of the aging greats in the PNC field wouldn’t be physically able to participate in an event that thrives on their very presence.

“You wouldn’t see some of the legends that I grew up idolizing and watching, and even got a chance to play early in my career, they wouldn’t be able to play in these events,” Woods said. “Their bodies are too banged up.”

Woods was talking about the likes of 82-year-old Lee Trevino — with whom Tiger and Charlie spent time hitting balls on the range Friday afternoon — but he could just as easily have been talking about himself.

Woods was then asked about whether he has any goals for next year, to which he reiterated that he does not have the endurance to realistically target what events he might try to play.

“You saw it out there,” he said. “I can hit around here, drop a ball here, hit a few wedges, do that. But to go out there and have 220 yards and know that you have to hit a 3- or 4-iron and miss the ball in the correct spot, and then hit certain shots and one stroke determines whether you win or lose, that’s a totally different mindset than what we have out here this week. I’m not there yet.”

We’ll all be along for the ride, just not in a cart.