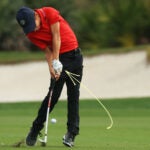 A strong grip is a match-up that works for juniors.

A golf swing isn’t a precious trinket. Something special you find once and leave untouched for years. It’s easy to think so, sometimes, when you hear a phrase like “swing your swing,” but the truth is that a golf swing is like a wine. The general outlines may remain the same, but the details change over time.

It makes sense why, too: Your body ages and gets stronger, weaker, or more flexible in different areas along the way. In order to get the best out of it, you need to mesh your golf swing to the current state of the body — which means it’ll change gradually over time.

One of the most common ways we see this happen — and, indeed, it will be on display at the PNC Championship this week — involves the grip.

When Tiger Woods made his way through the junior golf scene and arrived on Tour, he did so with a strong grip — meaning his hands were both turned away from the target, so they were more on the side of the grip.

Young Jack Nicklaus did, too. And so did Nick Faldo.

This week, you’ll see 12-year-old Charlie Woods boasting a strong grip of his own.

At first glance it’s unusual to see any golfer with a hold so much stronger than a conventional, neutral grip. Some well-intentioned parents of junior golfers may even see this as a swing flaw. But gripping it strong is a common trait among junior golfers and one that many top coaches endorse, for a simple reason: It helps them develop more clubhead speed.

“When you’re a kid that age, you’re undersized, most of them are trying to hit it harder, if you squared the face up you’ll probably hit it a little shorter,” GOLF Top 100 Teacher Tony Ruggiero says at the 12-minute mark in the video below. “I think leaving the grip strong and teaching them to really use their body, turn out in front of it and keep the face from shutting builds a lot of good things in there that you can always find the happy medium as you go.”

Young junior golfers whose bodies haven’t fully developed yet often boast two things: An extremely flexible, large range of motion, and a lack of upper body strength. With the glutes, thighs, quads and other leg muscles often the strongest in their bodies, this lends itself to a huge rotation of the lower body in the downswing.

This flexibility is evident in the side-by-side picture of young Tiger and Charlie below. Notice how both their hips are facing the target by impact.

This is what it looks like when a young, flexible junior golfer uses the muscles they do have to generate as much speed as they can. The trade-off is that a big rotation of your hips will tend to open the clubface, and send shots out to the right.

So, rather than slowing down your body rotation — and, therefore, your golf swing — to square up the clubface, most coaches will simply tell junior golfers to strengthen their grips. This creates what coaches call a “match up” in the golf swing which straightens out the shot without costing clubhead speed.

But as juniors get older and stronger, their upper bodies will begin catching up with their lower bodies. It becomes a bigger source for speed, and they’ll be less dependent on a huge lower body rotation

It depends on your body, but when that happens, that’s when an overly-strong grip can start creating swing flaws that send the ball hooking left.

And so, you’ll often see golfers start to weaken their grip, as Tiger explained himself in his book How I Play Golf.

“My own grip has evolved over the years. When I was a junior golfer, I preferred a strong left hand grip, my hand rotated well to my right on the handle of the club,” he writes. “Later, after I grew stronger, I weakened my left considerably. Today it’s in a fairly neutral position, with 2 1/2 knuckles showing at address.”

If there’s a key word in the above, it’s not strong or weak, but “evolution.” That, after all, is what golf swings do. They change and evolve. We’re lucky to witness the early days of one in the form of Charlie Woods. We’ll all wait to see where it’ll lead.