This is the biggest mistake golf bettors make, according to data experts 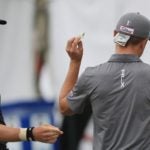 Who's the smart money on at the PGA Championship?

If your golf betting strategy is to trust your instincts, well, it’s possible you have very good instincts.

It’s more likely that you don’t.

This week, data analysts (and brothers!) Matt and Will Courchene joined the Drop Zone podcast (which you can listen to here) to break down how their company, DataGolf, uses predictive models to evaluate players — and occasionally pick winners. They also joined to do some common-sense mythbusting and to make me (and hopefully you, too) a little bit smarter.

I led with one big question:

What does the golf public get most wrong when they watch golf and think about placing some bets?

“I think the biggest thing people do is underestimate just how random golf is, so that leads them to value — and by random I just mean unpredictable,” he said. “Somehow in golf you just show up one day and Rory — well, Rory’s kind of an outlier, because he always hits it good. But some guy will come out one day and hit the ball like the No. 1 player in the world, and the next day he won’t.”

It’s a golf truism that form doesn’t follow exact rules and certainly doesn’t always hold from day to day. Look at Brendon Todd, who led at WGC-Memphis heading to Sunday and then shot the highest final-round score in the field. To make sense of that you mustn’t try too hard to fit it in a neat box.

“People see that and it leads them to value things like short-term form a lot,” Courchene continued. “It leads them to value course history a lot, because you see a guy come out and play extremely well at a course he’s never played before and you assume it’s meaningful. So I think that’s the biggest thing.”

The brothers mentioned the tendency of their model to focus on lower-profile players who might be undervalued. They can’t quit Bronson Burgoon, whose form is repeatedly identified as “encouraging.” They’ll keep backing Steve Stricker, too.

“The biggest differences between our model and what people would bet on is we’re often going back to the well on guys who have missed recent cuts.”

At one point, Will cut off his brother. “Matt, there’s a lot of unpredictability on one day. But over the course of a season, golf’s actually not that unpredictable.”

Another misconception from the general public? That winning, rather than overall play, is particularly useful as a predictive metric.

“I think often with winning, a lot of it is just luck,” Matt said. “Not everything, but sometimes another player just plays really well. Like, Phil would have won any other British Open other than the 2016 British Open against Stenson.”

In evaluating players on the betting market, someone who has demonstrated the level of play necessary to win without actually winning is an appealing figure to the DataGolf approach.

Still, the Courchenes admitted that there are a few outliers who make that approach look foolish from time to time.

“There are anomalies,” Matt said. “Brooks Koepka is a guy who we wrote about in previews for the majors last year; in every one of them we were saying that Koepka is way overvalued.”

“We obviously know how that turned out,” Matt said.

“I would stay away from outrights, I think,” Matt said, talking about those tempting to-win bets. “In general, I would stay away from the place that you’re probably going to go, which is to bet on a favorite to win the tournament.” Again, don’t necessarily trust your instincts all the way.

“Those are almost certainly overvalued,” he continued, explaining that the extent to which you’re getting “screwed over” is higher in the outrights market, where the total “value” is adding up to some 140%, as opposed to 107% or 110% for matchups.

In the end, Matt said he thinks the best value is still in top-20 bets — plus some day-by-day round matchups to keep you engaged.

“Most people are just betting for entertainment, so often when your top-20 bets have bombed out by Thursday or Friday, matchups are good daily entertainment and there’s pretty low margin,” he said. “In general, when we’re betting we’re always betting on lower-tier players in top-20 markets.”

To hear the rest of the interview — including who the DataGolf guys like at the PGA Championship — you can listen to the embedded podcast below or by clicking any of the following links:

To listen to the Drop Zone, follow wherever you listen to podcasts: iTunes | Spotify | PodBean | Stitcher

The 5 best weather apps, according to golf-course superintendents

Corales Puntacana odds to win: Will Zalatoris the surprise favorite

Clubhouse Eats: The mid-round snack at Mexico's Costa Palmas is a culinary experience like no other