This forgotten Phil Mickelson commercial showed off his sense of humor 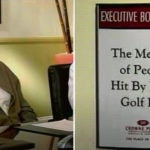 In researching this week’s episode of the Drop Zone, which celebrated Phil Mickelson’s 50th birthday, we dived deep into the archives. My co-host Sean Zak and I identified seven attributes that make Phil, well, Phil. Among them? Phil the Entertainer.

These days, Mickelson is as ridiculous (and entertaining) a showman as exists in the game of golf. His Instagram page is loaded with outrageous videos, some of them satirical, some earnest, most of them some combination of the two, every one of them entertaining. He singlehandedly carried The Match II, providing much of the color commentary and even draining some crucial putts down the stretch.

It’s easy to forget that Mickelson wasn’t always quite like this. He was far more private and played things safer in the public eye. Earlier in Mickelson’s career, outsiders knew he had a keen sense of humor but didn’t always see it on display. But there were signs of the Mickelson to come — namely in one ad campaign from Crowne Plaza.

In 2008, the hotel and resorts chain announced an ad campaign focused on the slogan “The Place to Meet” that featured Mickelson as top talent. While the website built to house the ads, ameetingwithphil.com, is now defunct, a few still live on YouTube, each featuring Mickelson as the meeting’s host. The first is “The Meeting of People Who Look Like Phil,” which features two Phil lookalikes and a third who bears notably less resemblance. It’s funny!

The second spot is “The Meeting of Phil’s Biggest Fans,” which includes one man talking about papering his cubicle with pictures of Mickelson as well as a bit of a raunchy ending (this was 2008, after all).

But my favorite is “The Meeting of People Hit by Phil’s Golf Ball.” This spot co-starred David Feherty and was a guaranteed winner because of Mickelson’s famed waywardness off the tee. But it especially worked because Lefty was willing to poke fun at his greatest defeat: the 2006 U.S. Open at Winged Foot.

“I was hit in the foot,” one woman says, beginning the rundown.

“You hit me in the back, I was on my cell phone,” a second woman says.

“You were on a cell phone, for crying out loud,” Mickelson counters. “I feel slightly vindicated here.”

“Was that at Winged Foot?” Feherty asks, then turns to Mickelson. “Did you win that one?”

Mickelson’s pained expression sells the whole spot. It was the crowning moment in a series that gave us a glimpse of the self-deprecating entertainer we’ve become much more familiar with of late.

The best part of the ad? It’s true! The punch line, at least. The agency running the ad held auditions in New York, Los Angeles and San Diego. Among their finds? From the New York Times: “16-year-old Daniel Stewart of Pound Ridge, N.Y., who was hit by a Mickelson tee shot during the United States Open at Winged Foot two years ago.”

Feherty told the Times that the pain makes Mickelson that much more relatable — and in turn lovable.

“I don’t have any qualms at all about just offering him up that line because it gives him a chance at dignity, like: ‘Hey it’s not going to bother me. I am big enough to find that funny.’ That makes people respect him even more.”

For more heroic spots and a complete breakdown of Phil the Pitchman (plus six more of his most entertaining attributes), listen to this week’s Drop Zone below or anywhere you find podcasts: