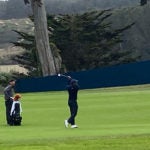 Tiger Woods hits a shot at Harding Park on Sunday.

The 15-time major winner was practicing Sunday for this year’s first major, the PGA Championship, ESPN reported. Woods hit balls on the range at 1 p.m. local time, played the back nine, then played the front nine in advance of the tournament that starts Thursday in San Francisco.

Woods has not played since he tied for 40th two weeks ago at the Memorial. Before that, he had not played since mid-February due to ailment and the PGA Tour’s three-month hiatus due to the coronavirus.

At the Memorial, Woods played well during rounds 1 and 3 — a pair of 71s — and not so well the rounds after — a pair of 76s. After the second round, he said his back slowed him, which has been a long-time issue.

On Sunday, according to ESPN, the four-time PGA Championship winner appeared relaxed in his first visit to Harding since the 2009 Presidents Cup.

Woods walked with caddie Joe LaCava and friend and adviser Rob McNamara, then was joined by another former PGA champion, Jason Dufner, on the front nine. Woods hit multiple shots. He worked around the greens.

Woods said after the Memorial that his swing felt “good.”

“I was able to hit good shots,” he said. “Friday was a bit off physically, but overall for my first week back, it was a lot, a lot of positives.”