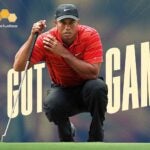 Could we see Tiger Woods on a video game cover soon? That just got more likely today.

Get ready, gamers. Tiger Woods is coming back to the video game world.

Game-maker 2K Sports has signed into a “long-term” partnership with Woods, who will become an “executive director” for its PGA Tour game franchise. The game will incorporate Woods’ image and likeness, and 2K will be able to use Woods within any golf games it creates throughout the deal, the length of which was not disclosed.

“I am looking forward to making my return to the video game landscape, and with 2K and HB Studios, I’ve found the right partners to make it happen,” Woods said in a press release. “I’m honored to take part in this opportunity and look forward to sharing my expertise and insights as we build the future of golf video games together.”

Woods, who recently suffered serious injuries from a car crash in California, was once heavily involved in golf video games as the name and annual cover star of the Tiger Woods PGA Tour game, produced by EA Sports. That franchise included Woods as its cover star from 1998 to 2013 before turning it over to Rory McIlroy for one iteration. Woods has been absent from the video game space ever since.

2K is different brand, though. It has had incredible success in the sports category, namely with its NBA franchise. PGA Tour 2K21 has sold nearly 2 million copies since it was launched in August. A spokesperson for the brand said they hope the move will bolster the golf video games category, and they believe they chose the right man to partner with for it.

“In golf, there is no bigger icon than Tiger Woods. Like the rest of the world, we were saddened to hear of his recent accident, and we wish him a full and smooth recovery,” David Ismailer, 2K President said in the release. “We have been eager to announce our partnership with Tiger, whose legendary career has transcended the sport. We are thrilled to have him join our PGA Tour 2K series as an Executive Director.”

It is unclear how Woods will be integrated into the current 2K golf offering, or if fans will have to wait for a new game to see one of the greatest golfers of all-time in virtual form once again. World No. 2 Justin Thomas is the reigning cover athlete, which was announced back in May of 2020.

As part of the announcement, 2K will be acquiring HB Studios Multimedia Ltd., the Canada-based studio that developed both PGA Tour 2K21 and The Golf Club. In its entirety, the acquisition marks one of the most robust moves in golf video games in many years.