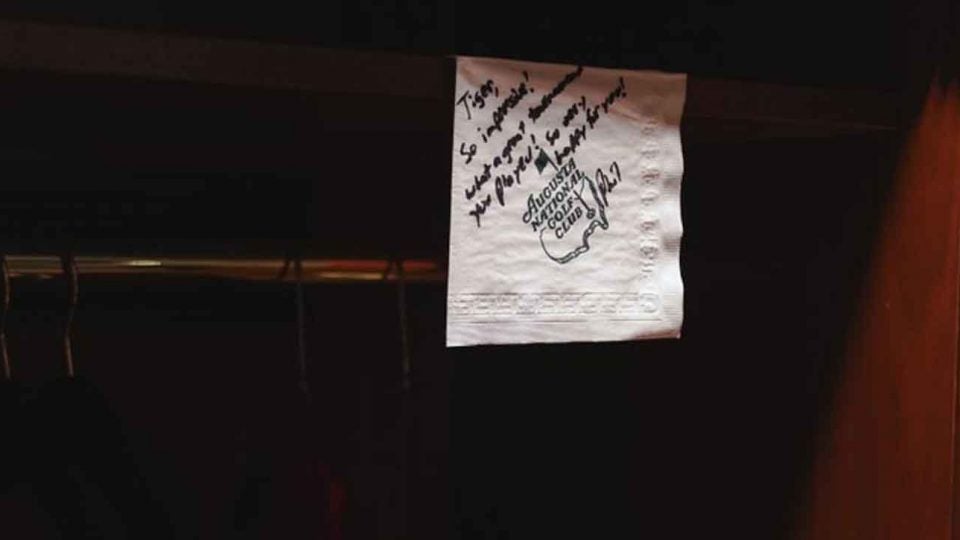 Sometime in the afternoon a little under a year ago, a while after he had plucked his golf ball out of the 18th hole and signed for his even-par 72 during the final round of the Masters, Phil Mickelson had a note to write.

Just 14 words and his first name. Somewhere along the way, he grabbed a black marker and a white cocktail napkin. The message fit snuggly above the green Augusta National Golf Club logo in the center.

On the second floor of the clubhouse, in the Champions Locker Room, inside the wooden locker with the gold nameplate that read “Tiger Woods” on one line and “1997-2001-2002-2005” on a second line, the three-time green jacket winner had the note sitting over a bar for the 2019 green jacket winner.

“Tiger, So impressive! What a great tournament you played! So very happy for you! Phil”

Just one champion, rival and friend congratulating another.

The photo of that note, along with five others taken inside the Champions Locker Room last year during Woods’ victory, was shared by the Masters social media feeds on Sunday, which would have been the final day of this year’s tournament. Last Monday, the event was moved to November because of the coronavirus pandemic.

Two of the photos show Woods getting fitted for his jacket – the version that Masters champions wear during the ceremony Sunday night is only temporary; victors soon after receive a customized iteration that they’re allowed to keep for a year. One photo on Instagram shows a close-up of one of the jacket’s gold buttons featuring the ANGC logo. Another photo on Instagram shows a view with Magnolia Lane in the background.

“An unprecedented peek inside the Champions Locker Room, during the intimate moments immediately following Tiger’s Masters victory,” the accounts wrote below the photos.