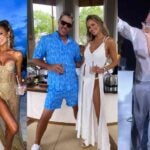 Hello, friends, and welcome to what I believe is the most densely-packed Rogers Report yet. Between the U.S. Women’s Open, The Match, LIV announcements, the Memorial, Tiger and Phil sightings and Jena Sims and Brooks Koepka’s wedding, it was an extremely busy week in golf. But that’s a good thing. As players try to qualify for Golf’s Longest Day on Monday, I think this seven-day stretch has been my favorite ever in the golf world. So much happened and we have a ton to dive into.

Nelly and Jessica Korda. Brooks and Chase Koepka. Grace Summerhays and literally all of her brothers. There are a handful of siblings that have taken over the golf world, and with Minjee Lee’s incredible victory at Southern Pines on Sunday, it’s time to give the Lee siblings some proper recognition.

Minjee has eight victories including two majors, and Min Woo has two wins on the DP World Tour. And look at their swings!

I was going to include a side-by-side picture comparing my swing with my brothers’, but you’d just see two extremely shut club faces — and who needs that? I am also obsessed with this amazing sibling moment caught by our very own Darren Riehl during Minjee’s trophy ceremony.

No big deal, just a quick sibling phone call with the U.S. Women’s Open champion! As one of five, I receive numerous sibling phone calls every day, but most of them are just Dunkin orders. I imagine the call between the Lee siblings was quit different.

Folks, the NBA Finals are here. These athletes pour blood, sweat and tears into prepping for these games. It takes years of hard work to get to this point. But you know what gives some players a little extra edge? Incorporating golf into their routine. And that’s exactly what Marcus Smart and Steph Curry have done.

Celtics guard Marcus Smart teed it up just outside of Boston last week. A few things to note here: Not only is Smart rocking a hoodie (once the subject of significant golf controversy), he’s got the hood itself pulled over his head! Hopefully he hits the ball straight so the sides don’t block his line of vision. He completed the look with a pair of sweats.

Smart teed it up at William J. Devine Golf Course Franklin Park, which was established in 1896. That makes it the second oldest public course in the country behind Van Cortlandt Park. It’s a Donald Ross gem and where Bobby Jones often played, so if Smart is looking to make history in his sport, he started at the right place. I am a little concerned by the fact that he is hitting about four inches in front of a cart path sign in the above photo, but maybe he’s just that good a shot-shaper!

As for Steph Curry? There’s nothing like new clubs, once you’ve got a nice set, there’s nothing like getting them re-gripped, which is exactly what Curry did last week. If you want to be on your A-game on the court, you also need to set yourself up for success on the course, and that means slapping on some new grips when it’s time. Well done, Steph.

We (the golf world) seems to be a house divided when it comes to various editions of The Match. I respect however you feel about it, and I will also be sharing what I believe were the highlights of Tom Brady and Aaron Rodgers’ victory over Patrick Mahomes and Josh Allen.

Profanity warning: if any of my loyal readers are children, please ignore the following video.

Tom Brady got me fired up about The Match with that one sentence! Then we had some golf ball jokes.

I have to give credit where it’s due. The trash-talking was pretty good! These guys were quick on their feet when it came to tossing daggers on live television.

I’ve been worried about Tiger for a few weeks now. Worried about his morale and his pain levels following his PGA Championship withdrawal. Luckily, I got to exhale a bit over the weekend when the lovely TWSpot on Instagram shared the following image of Tiger at Charlie’s junior golf tournament.

We’ve seen lots of sketchy, zoomed-in videos of Tiger walking at a junior golf tournament. I’d like to applaud Brianna, who took this photo, for requesting a selfie instead. It seems a lot more ethical. I’m not a parent, but I don’t think I’d ever get over bringing my middle schooler to play in a local event and have Tiger watching, too. I want it on record that I’d never be ashamed of my child, but I might feel a little embarrassed if my kid shot like, 120 in front of Tiger and Charlie.

We’ve had one Phil spotting since February, but my coworker and pal (and co-host of the beloved Drop Zone podcast) shared that Phil was spotted again last week!

…and then as I wrote this, Mickelson committed to this week’s LIV Series event in London, which you can read more about here.

It was a national holiday over the weekend. Not really, but DJ and Paulina’s youngest son, River, turned five and the celebration was significant.

This is, without a doubt, the most extravagant fifth birthday party I’ve ever seen.

I attended the Sims-Koepka wedding (vicariously, through Instagram) over the weekend, and I’m here to break it all down for you.

Jena and Brooks flew to Amanyara, a luxury beach resort in Turks and Caicos, to get the party started.

Guests began to arrive and were greeted with the coolest welcome gifts of all-time.

The Air Wedding 1s! How awesome is that. This is how you make the most of a clothing sponsor. Really well done, Brooks.

Yes folks, those are shorts with Jena and Brooks’ faces on them. More on that later.

Guests got to stay in beautiful villas on the island.

Does anyone else stay on a friend’s couch when they travel? Living out of a suitcase where your clean and dirty socks get mixed up and all your belongings end up sprawled across a living room floor? Jena and Brooks’ friends wouldn’t know what you mean. They lived the good life.

The bar was ready to go with Jena and Brooks-custom drinks as soon as people arrived.

And of course, their beloved black lab Cove had a beverage named after her as well.

People got settled in and hung out before the evening festivities began. Jena and Brooks made sure to rock matching sets with their faces on them. A marvelous touch.

On to the evening. Sims and Koepka hosted a dinner party by the beach.

The first course included cheese croquette and smoked tomato marmalade. Next up was Asian spiced tuna tartare and Wakame seaweed. For the main course, guests had a choice between either a black angus beef tenderloin with a truffle pomme puree and grilled asparagus or Chilean sea bass with roasted butternut squash and green peas and broccolini. And for dessert? Chocolate delight. This menu looks delicious. My only feedback? I’d love to know more about the chocolate delight. Google tells me it’s a layered pudding dessert, which is good to know if I ever decide to venture away from my Ice Cream Only rule.

On to Thursday. Brooks and Jena threw a white-themed party on the beach. Guests wore white, Jena wore gold. And once again, no detail was overlooked. Drinks came in coconuts with “J&B” engraved on the side, and Jena even rocked “BK” earrings.

Brooks even danced with some sort of open-flame on the beach. This is safe for four-time major champions only, folks. Do not try this at home.

This whole trip is an Instagram influencer’s biggest dream.

My favorite night of the festivities (again, I experienced this through Instagram). The couple hosted a chill game night and barbecue on the tennis courts. It was at this point I realized that Jena and Brooks literally thought of everything. In the midst of an extremely fun but tiring weekend, the guests would need a low-key night. And that’s exactly what they got.

After the morning, Jena went offline for a bit. Can you blame her? She was getting married!

It was a private ceremony, which I respect a lot. You can’t have people posting about your big day before you get to! Totally kidding (mostly). This allowed everyone to be present.

Jena looked gorgeous, and she even designed the inside of Brooks’ jacket, which featured pictures of the bride.

Lucky for us, phones were back out for the afterparty.

The Gretzky-Johnson wedding had Kid Rock perform. Jena and Brooks had Ludacris. These golf weddings are officially on another level.

It’s extremely safe to say this was an unforgettable weekend. Guests got to experience a wedding and a getaway vacation all in one. And I, Claire Rogers, got to experience it on the internet which is almost as good.

One final palate cleanser. Brooks Koepka wasn’t the only player to publicly display his love for his significant other over the weekend. Cameron Smith just got his wedges stamped with hearts and his girlfriend’s initials on them. Love is in the golf air!