Is Matthew Wolff being helped by a lack of fans at the U.S. Open? 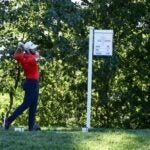 A handful of backyards in Mamaronek, N.Y., line the 11th hole tee box at Winged Foot Golf Club. People can watch the golfers at the U.S. Open, and the golfers can hear the people. Matthew Wolff made his way there two holes after roaring his way into the lead with a five-under 30 front nine. He hit.

“Wooooooooo,” the people hollered. A wolf howl. For a Wolff. “Wooooooooo.”

Silence might be why he and other younger players have been golden.

“I think it’s a huge factor,” analyst Jim “Bones” Mackay, also the longtime caddie for Phil Mickelson, said on the NBC broadcast on Saturday. “And, as you say, no disrespect to Matthew Wolff or any other young player in the field, but it’s just a completely different climate out here. These guys know it’s the U.S. Open, but nobody is screaming at you between holes, screaming for you, patting you on the back.

“It’s very quiet, it’s very comfortable, these guys are executing to the best of their ability, but there’s no question as this tournament unfolds that’s a big part of what these guys are not dealing with.”

Added NBC analyst Paul Azinger, himself a former longtime player: “There’s no energy out there. It’s like a zombie walk, the way they go on about it. It’s a shame there’s not a crowd of about 35,000.”

Rory McIlroy, a four-time major champion who is six shots behind Wolff, said the lack of a crowd will help during Sunday’s final round.

“It’s one variable that you just don’t have to deal with,” he said.

“It just makes it a touch easier for the guys at the top. Even today, look, you’ve got Bryson and P-Reed out in the final group, and any other U.S. Open final grouping, you’ve got those two guys, things are going to be said and tempers are going to flare. Even if those guys don’t have to deal with that today, it just makes it a little different and maybe a touch easier if you’re in those final few groups.”

Wolff said he hasn’t thought about it much.

“It hurt it. No, I’m just kidding,” Wolff joked when asked whether the absence of fans affected his play on Saturday. “Yeah, it’s obviously a lot different. I have yet to play in a major with fans, so I’m really excited for the first time that happens, but I think I do feed off of fans. Behind 10 green and 11 tee box, there are fans in their houses, they were howling for me, and I love seeing people out here, but it is a different atmosphere.

“I think coming down the stretch it maybe makes me a little more calm just to see less people, but yeah, I really don’t think too much about it. Once I’m out on the course, I’m kind of focused and doing my thing. And it’s going to be awesome when fans are back, but right now it is what it is.”