The Match 4: Why the Phil Mickelson-Tom Brady match has a 777-yard hole 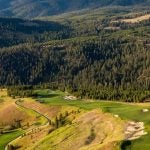 The 17th hole at the Reserve at Moonlight Basin is 777 yards.

Two players will no doubt give it a go on Tuesday. Moonlight Basin hosts the fourth edition of the Match, which pits the team of Bryson DeChambeau and Aaron Rodgers against the team of Phil Mickelson and Tom Brady. That’s DeChambeau, he of the PGA Tour-leading average of 322.4 yards per drive. And Mickelson, he of bombs and calves.

Ahead of them on 17 will be a fairway bunker that requires a 383-yard carry. And then a hole that’s another 394 yards away.

“What do you guys know about the golf course?” announcer Brian Anderson asked the players on a preview video. “I mean, it’s got some elevation. I think everybody here is going to be hitting lots of bombs on this golf course, yes?”