‘That’s like career s**t right there:’ Phil banks shot off tree to 4 feet 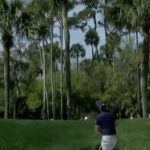 Phil Mickelson hits his second shot on Saturday on the 6th hole at TPC Sawgrass.

Phil Mickelson hit his drive on the 393-yard, par-4 6th at TPC Sawgrass, murmured “oh shoot” to himself and slapped his left leg, the sound as loud as the shot was off. His ball landed toward the front of a bunker left of the fairway. About 30 or so yards ahead of his ball was a collection of royal palm trees, and about 90 yards ahead of them was the pin.

“Wow, it’s like jail in front of you with those royal palms,” an announcer said during the PGA Tour Live’s broadcast of Saturday’s third round of the Players Championship. “Not sure he can get it up and over the top of them.

The play out of the sand was maybe a shot out to the right, where he could try to get up and down. Or maybe something under the trees. A shot over the trees was a thought too, but …

Mickelson hit, his ball hit one of the trees, and his ball ricocheted just short of the green before rolling to within 4 feet. He walked out of the trap, handed his iron to his caddie and brother, Tim, and grabbed his putter. He didn’t go right, under or over. Mickelson went through.

He smiled from the sand to the green.

“Any questions,” Mickelson said. “Do you have a question?”

“I have some questions for myself,” Mickelson said.

“That was awesome,” Howell said.

“You know, bank shots aren’t for everybody. But …,” Mickelson said.

“That is awesome,” Howell said.

“Oh my goodness,” Mickelson said. “That’s like career s–t right there. I will remember that.”

Mickelson would make the putt and shoot a one-over 71, and he’s 12 back of leader Lee Westwood entering Sunday’s final round. He’s likely down one golf ball, too.

“I mean, I think I might have bent this ball somehow,” Mickelson said to his caddie and brother. “I don’t see it, but … “

“Well, I was going to ask you when we grabbed it if we needed to switch,” Tim Mickelson said.