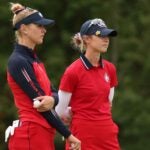 Team USA had a disappointing start to the 2021 Solheim Cup.

A lone half point was all Team USA could muster during the morning foursomes session at the 2021 Solheim Cup at the Inverness Club in Toledo, Ohio.

Each of the four team matches were ultra-competitive, needing all 18 holes to be decided.

In the opening match featuring Americans Danielle Kang and Austin Ernst against recent major champ Anna Nordqvist and Matilda Castren, Kang and Ernst were 1 up through 12 when the Europeans won three straight holes to eventually win the match 1 up.

In Match 2, Americans Ally Ewing and Megan Kang never trailed opponents Celine Boutier and Georgia Hall, but a late surge by the Europeans resulted in birdies on 17 and 18, which was good enough to halve the match.

American powerhouse Nelly and Jessica Korda never got any momentum going in Match 3 against Mel Reid and Leona Maguire. A bogey on the par-4 4th hole put the Kordas 1 down, and they never recovered, eventually falling to Team Europe 1 down on No. 18

The last hope for Team USA was Lexi Thompson and Brittany Altomare, who battled fiercely with opponents Charley Hull and Emily Pedersen, but like their teammates, Thompson and Altomare weren’t able to close out the match at the end. After arriving at the 15th tee 2 down, Hull and Pedersen won 15, 16 and 18 to take the match and the final point of the morning session.

Luckily for the Americans, there’s still plenty of time to turn things around. The afternoon four-ball matchups for Saturday are as follows:

You can find all the info you need to watch the Solheim Cup here.