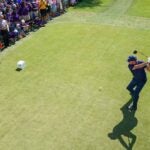 Phil Mickelson, two weeks ago on the par-4 12th at Timuquana Country Club, hit his tee shot right and into what a video on the Champions Tour’s website labeled as a “rough lie.” He’d also hit it some 300 yards on the 346-yard hole. On his way to winning the Furyk and Friends event, he’d drop a wedge to about 8 feet and birdie the hole.

Mickelson may not have hit his tee shot where he wanted to, but he hit it how he preferred. It was the Bryson DeChambeau method, which he rode to a U.S. Open victory last year at Winged Foot, with a dash of Lefty. Hit it left. Hit it right. Even hit it straight.

But just hit it deep.

Mickelson would finish the week first in driving distance (301.8 yards per pop). And 81st in driving accuracy (21 of 42 fairways). But does hitting it far and sometimes wide work everywhere? Mickelson’s defending his title this week at the Dominion Energy Charity Classic at the Country Club of Virginia, a course Mickelson himself said would require him “to be a little bit more patient and manage my game a little bit better.” A reporter noted that and asked:

“Please correct me if I’m wrong, [but] your last win on this tour, you were 81st in driving accuracy, I think. I don’t know if I have that exactly correct, but would you get away with that here this week?”

“So, I look at longest, like I try to hit it the farthest out here, and I was No. 1 in driving distance,” Mickelson said Thursday. “That’s the way I look at it. If you want to look at stuff that’s irrelevant, have at it.

Still, Mickelson admitted, at least for him, that that’s less difficult to accomplish on the 50-and-over tour, where the setups are a bit more friendly, than the regular tour, where they are not.

“I’m using this as an opportunity to have fun, to be around people that I know, guys that I know,” Mickelson said. “I’m using it as a chance to be competitive but in an environment that doesn’t beat you up. I think it’s underrated how difficult the courses on Tour set up, how tough the pin placements are, and you’re really not able to get away with a miss because the pins are so close to the edges. If you short-side yourself, you can’t get up and down.

“I like being able to play aggressive, so it lets me have fun and play the way I like to play out here, and then I try to take that back to when I play on the regular tour and try to implement that type of play. But I always have to dial it back on the regular tour and be more cautious, play to more center of the greens, have more 20-, 30-footers, because if you short-side yourself there, they’re so close to the edges, you can’t get up and down.”

That being said, it’s not as if the Champions Tour is playing on open driving ranges. On consecutive days two weeks ago at Timuquana Country Club, even Mickelson was so far left on the par-4 16th that he was left with a punch shot through trees. There was some defense.

There was just more offense.

“It just shows that length plays a huge part in this game, and obviously the short game as well, the wedge play and the putting. But I didn’t think that would be possible on a golf course like we played in Jacksonville, to miss that many fairways and end up on top of the podium. But, you know, Phil did it, so all kudos to him.”