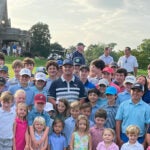 Bryson DeChambeau poses for a photo

The last time Bryson DeChambeau was on the grounds at Winged Foot Golf Club, he was writing his name into the history books. In front of a crowd limited to club members, DeChambeau’s par-saving putt on 18 put a cap on a six-shot victory for his first career major title.

Back in the area for the 2021 Northern Trust, GOLF.com’s Playing Editor stopped at Winged Foot on Monday afternoon for the first time following his victory. Welcomed back for a special event celebrating his victory almost a year ago, he met members and hosted an instruction clinic for the more than 300 members and their families in attendance.

“It was such an honor to be invited back to the club for the event. … I’m so grateful,” DeChambeau told GOLF.com. “Everyone I met was so amazing, and being able to speak to juniors was a lot of fun, too.”

The topic of his clinic was power, specifically addressing how amateur golfers can practice speed training. After taking golfers through his general process for warming up and working his way through the bag, DeChambeau started hitting drivers at gradually increasing speeds.

The kind of twice-daily speed training DeChambeau practices on his own can get pretty intense, so his advice to the group — and the rest of us at home — was to smart small. Just a few hours a week, he says, can go a long way.

“Take two days out of the week, and on those days for an hour swing with as much effort as you can,” DeChambeau said. By simply swinging with maximum effort, DeChambeau says, you’ll be building your golf muscles and breaking the neurological barriers that prevent you from maximizing your potential.

And after that, take your time to relax, he says. Allow your muscles to recover, work on increasing your flexibility and get your body ready for its next session.

“Recovery is key,” DeChambeau says. “Those 48 hours after speed training, are so important. Giving your muscles time to recover, and your nervous system to rest is so important, and not something I thought about when I started [speed training].”