All 11 of Tiger Woods’s Ryder Cup partnerships, ranked from best to worst

Perhaps you heard, Tiger Woods is back on the U.S. Ryder Cup team after a six-year absence. The 14-time major champ landed one of Jim Furyk’s captain’s picks after an impressive run. Almost immediately, fans began speculating who his playing partner will be for the first few days.

Tiger hasn’t had much success in team play — his record his a dismal 9-16-1 — and he’s rifled through 11 different partners in the process. Here are all his Ryder Cup partnerships through the years, ranked, heading into the 2018 matches… 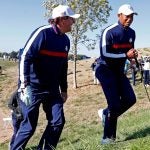 You may also like Tiger and Phil are practicing together! But does that mean they’ll play together?

If Davis Love III had a few more reps, he may well have topped the list. He didn’t, so we’re going with current U.S. Ryder Cup Captain Jim Furyk.

Their 2-2 record seems a little unspectacular. But consider the context: Furyk and Woods went 2-2 playing all four matches together in 2006, when one of the great European Ryder Cup teams eased to a nine-point victory. Their two losses came against some fantastic players in Luke Donald and Sergio Garcia, and Darren Clarke and Lee Westwood.

Tiger missed the 2008 Ryder Cup with an injury and by 2010 a new partner had emerged. But for a brief, beautiful moment, Tiger had seemed to find his guy.

This was perhaps Tiger’s greatest multi-Ryder Cup partnership that never was. The duo handily beat Darren Clarke and Thomas Bjorn 4 and 3 in their first match together in 2002. They followed by toppling an in-form partnership of Sergio Garcia and Lee Westwood. 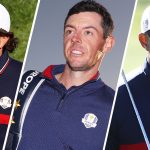 You may also like A definitive ranking of all 24 Ryder Cuppers, from worst to first

Hal Sutton decided to mix things up at the next Ryder Cup (we’ll get to that), which effectively spelled a premature end to this budding partnership. They were paired together once more in desperation late in the 2004 Cup, but lost 4 and 3 and never teamed-up again.

The only match Tiger played with his friend Chris Riley came on the heels of a disastrous experiment with Phil Mickelson. Riley and Tiger stormed to a 4 and 3 victory over Darren Clarke and Ian Poulter in morning fourballs just as the Ryder Cup was in danger of slipping away.

That morale boost was promptly quelled when Riley told Captain Hal Sutton he was “tired,” which Sutton misinterpreted as a request to sit out the afternoon session. Riley went to the bench, and by the end of the day the U.S. team had dug themselves into a hole they couldn’t climb out of.

Tiger Woods and Steve Stricker’s partnership has been more successful in the Presidents Cup. Truth be told, it’s a little sketchy in the Ryder Cup.

They started by winning their first two matches together, then proceeded to lose their next four as a pair — including one 6 and 5 to Luke Donald and Lee Westwood. I was tempted to rank them lower, but knowing Tiger and Stricker would be paired together did bring a welcome sense of stability — if only for a few years.

1-2-0 isn’t great, but all three of Tiger and Mark-o’s matches together came in 1997. Pairing a young Tiger with a steady, familiar hand like O’Meara in his first Ryder Cup (which also happened to be abroad) was smart captaining by Tom Kite. It was a partnership that should’ve probably extended into 1999. Which moves us nicely down the list…

One of the reasons the U.S. needed to stage such a massive comeback on Sunday at the 1999 Ryder Cup was partly because of all captain Ben Crenshaw’s questionable decisions leading up to it.

Rather than keeping O’Meara and Woods together, Crenshaw flailed and paired Tiger with three different partners in four matches. Pate was the only experiment that didn’t completely bomb-out: The two went 1-1-0 in their only two matches together.

One match, half a point. The only reason we didn’t include him alongside the fellow one-and-dones below is because they didn’t lose their only match together in 1997.

The one-and-done section. Not much to distinguish these three one start-one loss partnerships. Lehman probably had the had the toughest break, playing well only to run into a red-hot Sergio Garcia-Jesper Parnevik duo in 1999. But ultimately, they were all wholly forgettable flings.

This is not a slight on Phil as a player — only a fool would doubt Phil’s prowess through the years. But let’s be honest: Phil Mickelson and Tiger Woods were a terrible Ryder Cup partnership. Maybe things are different now, but at the time, the two rivals mixed like oil and water.

There’s a reason it’s smart to split up your best players: Pair them together, and they could win a maximum of two points and at worst, a minimum of zero. Play them in separate matches, and there’s still the unlikely possibility of the two players ending with zero points over four matches, but there’s also the upside of potentially winning four points.

Hal Sutton pairing his two best players together (twice!) was an unnecessary gamble that backfired hard. The two best players came out of the first day with zero points, and left U.S. team morale in the toilet. Will we see an encore in 2018?