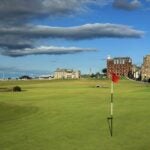 How does one tell the story of golf in only two hours? Well, they start at St. Andrews, and in all likelihood, they end there, too — with the playing of the 150th Open Championship next July.

How does one tell the story of St. Andrews in two hours? Well, that’s a bit more complicated.

On Monday evening, Golf Channel’s documentary “St. Andrews: The Greatest Golf Story Ever Told” debuts for the first time on the network. The project, which features interviews from dozens of experts, golfers, and prominent golf industry figures, explores the origins of the Old Course, the history of golf and the area’s prevailing legacy upon the modern game.

Simply put, “The Greatest Golf Story Ever Told” is a love letter. A love letter from the network — and its Golf Channel Films team, headed by executive producer Izzy DeHerrera — to St. Andrews, to the game of golf and yes, to golf fans everywhere.

The film focuses largely upon the story of the Old Course at St. Andrews, from humble beginnings to the formation of the Society of St. Andrews, its brief period as a rabbit farm, and later, its role in the development of many of the game’s foundational figures, including both Old and Young Tom Morris.

“The Greatest Golf Story Ever Told,” borrows elements of its cinematic style from legendary documentary filmmaker Ken Burns, approaching its subject with an exhaustive desire to tell a rich, colorful story through the eyes of experts and firsthand sources. In this area, it succeeds tremendously — showering viewers with the sort of fact-laden storytelling that leaves the audience feeling as though they are experts in the filmmaker’s subject.

The film relishes in catering to a diehard audience, as much is clear by the end of the first hour, which largely takes place in the late 1700s and early 1800s. Still, it possesses the sort of broad appeal to appeal to the casual golf fan (among the wisest creative decisions of the film in this respect were to include Tom Doak’s architectural insight on a walk through the Old Course and footage from a group of Average Joe golfers playing the Old Course for the first time).

There’s an argument to be made that too much of the recent history of the Old Course is glossed over, particularly in its role shaping the careers of 20th and 21st century champions like Bobby Jones, Tiger Woods and Jack Nicklaus. Rather, the film hones in on St. Andrews’ foundational figures and upon those who helped shaped the course’s legend. The are also wandering moments, likely a byproduct of resisting the temptation to follow a strictly chronological timeline.

Still, the final product is wistful, reverential, and remarkably in-depth. It is clear that, in telling this story, Golf Channel sought to understand the legend of the Old Course, and not merely to repeat it. As much comes through in the film’s cinematography, which features terrific footage of the course and if its surrounding area, and through the variety of voices used to gain a full perspective of the story.

Ultimately, “The Greatest Golf Story Ever Told” is a tremendous recounting of the history of golf history. It’s worthy endeavor for golf diehards, and the sort of project Golf Channel will be able to lean on for years to come, particularly in the lead up to next year’s Open Championship. Fans who wish to watch the debut can tune in at 8 p.m. ET on Monday, July 19, on Golf Channel.