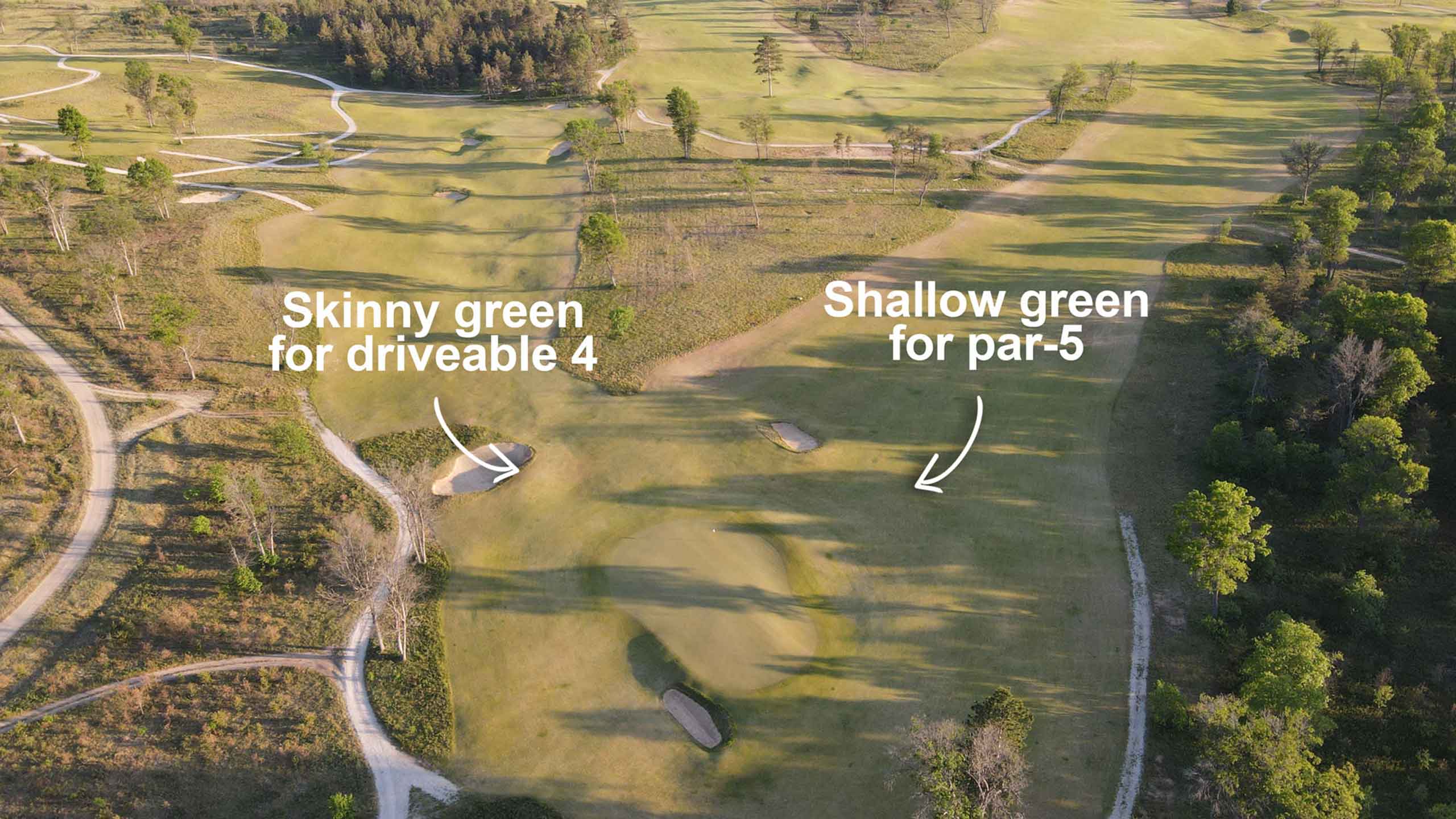 While playing The Loop, it's always fun to look back and see how you have to play the hole in the opposite direction.

Like many remote golf resorts that have popped up in the last two decades, the drive into Forest Dunes paints a picture of the entire experience to come. Long, one-lane country back roads lead up to an expansive golf oasis that is just … out there.

That’s the point. When you’re there, you’re there. No need to go anywhere else. And so the two whitetail deer figurines that make up the entrance sign at Forest Dunes are fitting. This is the wilderness. But what they should also have out front is some kind of carnival hype man, shouting, “Come one, come all! To Tom Doak’s Magical House of Mirrors!”

Yeah, The Loop is pretty trippy. In all the best ways.

Nestled up in Northern Michigan, smack dab between Lake Michigan and Lake Huron in a village of 1,000 residents, Forest Dunes is a lot like destination summer camp. Golf by day, unwind under the stars by night. Sing a little Kumbaya if you’d like. But, frankly, don’t do much else. That’s the beauty of it. The “camp” part is important, too. You’re going away to learn something here. And all it really takes is two days. Our trio of GOLF.com staffers, including Dylan Dethier and James Colgan, ventured up to Forest Dunes for our own summer golf camp, and here’s what we learned.

Its reversible course, The Loop, is magnificent

In this line of work, I’m lucky enough to play a fair number of rounds at excellent golf courses. And perhaps once a year I’ll finish playing a course and think, “Wow, that’s unlike anything I’ve seen before.” The Loop is one of those tracks. There is basically nothing like it.

Our sherpa for the week was Tyler Tabor, a modest 6-handicap who has worked at Forest Dunes for four years. He put it plainly when he said, “We believe it’s the first and only truly reversible course in America.” Need any more encouragement?

While it’s not the only reversible course in the country, The Loop might be the best. It switches direction based on the calendar, with the Black Course on odd numbered days and the Red Course on even numbered days. (For those wondering, on the few 31st days of summer months, they’ll host an event called The Dual, a two-man best ball that has players play the course in one direction during the morning and the opposite direction in the afternoon.)

And so any trip to Forest Dunes requires at least two days, one to play The Loop in each direction, the second of which will really get your head spinning. Wait, what hole was this yesterday? This was a par-4 green from that direction? Oh, that’s the big bunker you played from 16 hours ago…” No golf course invokes the word “yesterday” more than The Loop.

The three images below should help explain just how the reversibility looks from up above, and how different lengths of holes matter for the direction the green runs in.

The first course at Forest Dunes is actually called Forest Dunes, and it was designed by Tom Weiskopf long before Doak came around. Weiskopf built the more wooded parkland course for private ownership initially, but now that it’s public it can shine alongside The Loop better than ever before.

Forest Dunes itself is more than worthy of your time. It’s ranked No. 73 in our Top 100 Courses You Can Play. With more shade from the trees, this course plays a bit softer on the fairways and the greens (although those rolled extremely fast the morning we played) and much more difficult from the rough. It is an inherently different test, particularly for the player who struggles off the tee (that’s me!). And so when I carded an 83 at Forest Dunes one day after shooting an 82 at The Loop, I knew damn well which of the two scores was better. The 83, by a full four strokes on my index. Anyone who visits Forest Dunes and doesn’t play the original course is missing out. Just make sure you order your rounds appropriately. It’ll play a lot differently than The Loop.

Remote golf is a hot ticket

Name a golf buddies’ destination, and figure out if there’s a major airport within one hour of the property. Chances are, there isn’t. Bandon. Sand Valley. Streamsong. Pinehurst. Gamble Sands. Cabot. They’re all remote! And some obviously more than others (Pinehurst isn’t that far from Charlotte or Raleigh, and Streamsong is sort of close to Tampa), but remoteness is an asset for major golf resorts, it seems. It makes sense then, that when Forest Dunes went up for sale in 2020, it was acquired by the original developers of Streamsong Resort and its three courses. So yeah, another course could be in the cards at Forest Dunes.

As for remoteness, Forest Dunes ranks right up there with the others listed above. It’s 5.5 hours from Chicago, three from Detroit and easily accessible from Canada. The nearest airport is Traverse City, which isn’t big, but the beauty of that commute is the golf delivers at the end of your journey. This rainbow actually has a pot of gold.

Angles matter more than ever!

The superintendent at The Loop has one of the trickiest, most creative jobs in all of golf. There are no true “teeing grounds” at The Loop, just flat areas on short grass that one can eventually play from, if the super sticks the tee marker there that day. And note the singularity there. The Loop’s tees are marked by a single little flag in the ground and the unwritten rule of, “Play it somewhat close to here.”

As a result of its openness, there are potential teeing grounds everywhere, with most par-3s having a quarter circle (or more) of potential hitting spots surrounding the green. Why does that matter? Well, it keeps the divots from piling up, for one. But it also completely changes how the hole sets up to the green.

Since the greens are meant to be played from both directions, it follows that just about anywhere in between those vectors is a potential approach shot as well. What the openness of The Loop giveth in playing an entire round with the same ball, it also taketh in saying “This green isn’t accessible from here, buddy.” Have I given this inanimate playground a functioning voice and brain? That’ll happen at Tom Doak’s House of Mirrors.