The surprising cause of slow play, according to a World Golf Hall of Famer 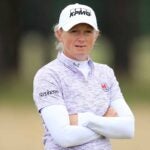 Stacy Lewis waits on the fairway during the third round of the 2020 Ladies Scottish Open.

It seems like every few months, something happens to reignite the debate on what should be done about slow play, and this time, it’s the women’s tour’s turn under the microscope.

After winning last week’s Ladies Scottish Open, Stacy Lewis opened up about the difficulty of staying focused when the pace of play is brutally sluggish.

“I was singing songs in my head,” she said. “Just getting away from everything, just trying to pass the time.”

“It shouldn’t take that long to play,” Lewis said afterward. “I do think an effort needs to be made across the board to play faster, because obviously I wasn’t watching it on TV, but I’m sure it couldn’t have been fun to watch on TV.”

This week, the women are teeing it up at Royal Troon in Scotland for the first major championship of the season, the AIG Women’s Open. Golf Channel analyst Judy Rankin participated in a pre-tournament conference call where she was asked for her thoughts on slow play, and the Hall of Famer had a surprising answer.

“I think — and men’s golf is not immune, but just specifically to women’s golf, there’s a tendency to be a slightly too polite,” Rankin said. “I think you’re just going to have to understand that everybody is going about their business until you’re actually playing the shot, and it’s not everybody stands back and the floor is yours.

“Because sometimes this feeling that you have to be very still and not create any commotion while someone else is playing is a big part of the problem,” Rankin continued. “And everybody has to get on that page and realize that people are going to be moving around, they’re going to be this, they’re going to be that, until you hit your shot. There’s a level of good sportsmanship and politeness and then there is just the practicality of playing the game.”

Slow play has been a problem for both men and women on professional tours around the world, and while everyone seems to agree that eliminating slow play should be a priority, there has been a regrettable dearth of workable solutions. Perhaps calling attention to the issue publicly, as Lewis did, is one step toward positive change. Though if it was up to Lewis, the Tour would take immediate and aggressive action.

“I would like to see it be penalties instead of fines,” she said of slow-play infractions after finishing her final round on Sunday. “It needs to change because we’re going in the wrong direction.”