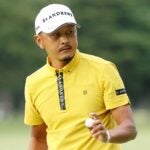 Hiroshi Iwata waves to the crowd after holing out on the 9th green during the first round of the Zozo Championship.

Hiroshi Iwata was asked a straightforward question. What’s your mindset for tomorrow? This happened on Thursday at the Zozo Championship in Japan, not long after he shot a seven-under 63 to take the first-round lead in his home country.

He started by talking about how he hopes he gets less attention, because he wasn’t a fan of all the pressure. That would help him focus better. But then he mentioned something that happened earlier this week, and the way in which he brought it up, without relating much to the actual question that was asked, indicated it had been bothering him.

“A lot happened earlier in the week,” he said. “Someone asked me if I was a caddie when I was having a meal. Events like that would get you more fired up to play well than someone giving you compliments. I don’t want to get into the details but this person was not a player.” (If it’s any consolation to Iwata, he’s not the first tour pro to be mistaken for being, well, not a tour pro. Earlier this year on GOLF’s Subpar, PGA Tour winner Adam Long revealed that he is frequently mistaken for being a fan, citing one incident when he stayed at a New Jersey hotel for The Northern Trust. A fan stepped onto the elevator and asked Long, “You think any of the players are staying here?”)

Turns out Iwata used that slight as proper motivation, making six birdies, an eagle and just one bogey. This comes after he wasn’t even in the field until Kevin Na withdrew, which got Iwata in as an alternate.

Iwata dropped down the leaderboard with a 73 on Friday, but he’s still in good shape heading into the weekend. At four under for the tournament, he’s four back of 36-hole leader Hideki Matsuyama.

Can Iwata make a weekend run? It might depend if he finds the right motivation.