Ryder Cup captain’s picks: Should the Europeans call up the old guard, or go with new blood? 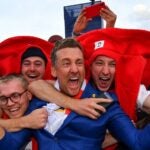 Ian Poulter has been a Ryder Cup stalwart.

The 43rd Ryder Cup is just around the corner, on Sept. 24-26 at Whistling Straits in Wisconsin. We know who the automatic qualifiers are for the U.S and who they likely will be for Europe, so now the fun begins as we wait to see which players land a spot via captain’s picks, which will be announced in the coming weeks. Yes, Jordan Spieth wasn’t an auto-qualifier, but let’s get real, Spieth will be on the U.S. team. But what about the other guys, the players who might not be slam-dunk picks? In the days leading up to the captain’s picks, our staffers make their case for some of those players.

With the European team taking shape as the Ryder Cup quickly approaches, three European Ryder Cup legends — Ian Poulter, Justin Rose and Sergio Garcia — are on the outside looking in. Should captain Padraig Harrington use his picks to bring them back into the fold, or is it time for new blood? GOLF’s Micheal Bamberger and resident European, Luke Kerr-Dineen, debate.

Get the band back together, by Michael Bamberger

Hey, Paddy, are you thinking what we’re thinking, that it’s time to get the band back together one more time?

We know you, Capt. P.P. Harrington. Your likes, your dislikes, what makes you tick. (Well, everybody does. Because you actually answer questions!) You want to win on foreign soil, of course. Yes, it takes talent. Of course it takes talent. Your team will have talent. But it takes cool hands under pressure, too. That is, grownups in the team room. Graybeards who know a thing or two about digging deep and staying the course when the chips are down and the fans are loud. So you’re surely thinking what we’re thinking: bring back the Big Three, modern Ryder Cup/Team Europe division.

Bring ’em back to the fold, back to the team room and the first tee, for one last hurrah.

Justin Rose is 41 and has played on five teams. Yes, he’ll be a captain of the European team someday. No, he’s not close to making the team on points (19th in the standings). What he knows is what it takes to win, on the course and in the team room. He’s played Whistling Straits often and well. Come late September, he’ll rise to the occasion, because he’s a thoroughbred and that’s what thoroughbreds do. He won a U.S. Open as an Englishman abroad. That’s not easy. You want an adult to play with one of your rookies? Enter Justin Rose.

Sergio Garcia is also 41. He’s been on nine teams. After Seve, he is the face of the European Ryder Cup experience. Like Rose, he’s won a major (the Masters) in the United States. Nobody knows more about what it’s like to play when the volume is turned up. Garcia, of course, will be a future Ryder Cup captain. He might be one of the best ever. In the meantime, you could not have a more effective sounding board, a sort of assistant captain without portfolio. He’ll be able to tell you things about your players you may not know yourself.

Ian Poulter is 45. He’s not the player he was. But he is the Ian Poulter he’s always been. That is, not the guy you want to see on the other side of the first tee. It is a cliche born in truth that this guy has the ability to dig deep and find a chip shot, a pitch and a point where another player won’t. He’s been on six teams. Your club has won five of those times. He has never not made the difference.

Luckily for you, Lee Westwood will almost certainly make the team via your World Points list. That’ll give you four veterans. Veterans who know how to keep the grip pressure light when the Ryder Cup pressure in unrelenting. You know how important that is, but you won’t be playing any shots. But those four will. Or they could.

It’s time for some new blood, by Luke Kerr-Dineen

It’s only when we get away from these fundamentals when things go wrong. Like in 1999, when Mark James left three rookies on the bench until Sunday — and left without the trophy because of it. Or more recently in 2016, when six of the 12 players were rookies, and Darren Clarke could only play four of them on the first day.

As grateful as I am to the old-guard that delivered so many trophies, I can’t shake the feeling that turning to them once again is actually just turning our backs on what brought the team they thrived on so far.

Barring something surprising, the nine is effectively set: Rahm, Fleetwood, Hatton, McIlroy, Hovland, Casey, Fitzpatrick, Westwood, Lowry. There are two rookies in that bunch — Lowry and Hovland — though Open champion Lowry seems like one of those rookies in name only. All of which is to say the team has some luxury to be inventive with the three remaining captain’s picks, to get some fresh blood flowing, and even keep an eye on the future.

Bernd Wiesberger might be the last man out; could he provide the kind of under-the-radar rookie spark which pops up in every great European Ryder Cup team?

It’s also about time we have a stalwart Scot back on the team, and there’s something about 25-year-old Robert MacIntyre that could fit the role not just now, but for years to come.

Alex Noren isn’t a rookie, but he did hole the final putt of the contest last time around. He’s also rounding into form at exactly the right moment, with T4 and T9 finishes in his last two starts. He plays full-time state-side, and his signature bullet low-fade seems like exactly the right shot to navigate around the windswept fairways of Whistling Straits.

There’s an opportunity cost to whoever Harrington calls up with his picks, and therein lies the greatest dilemma of entrusting the old guard one more time: It’s not what you’re getting, it’s what you’re leaving behind.