Ryder Cup 2021: Here’s who’s in, who’s out, and who’s on the bubble after auto-qualifying 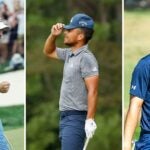 Patrick Cantlay will be among those donning the red, white and blue at Whistling Straits, but a few stars remain on the bubble.

It’s possible that the Ryder Cup receded to the periphery as one of the great playoffs in PGA Tour history concluded on Sunday afternoon at Caves Valley. As is generally the case with heart-thumping, palm-sweating do-or-die moments, Patrick Cantlay and Bryson DeChambeau’s duel proved the perfect distraction from all other things.

But it wasn’t long after Cantlay captured victory that the focus returned to the event engulfing the golf world this fall: the Ryder Cup. Not even Cantlay himself could avoid it.

“It’s nice to get in on points, I think that’s the case,” he said. “I’m really looking forward to that whole event. I’ve heard so much about it and watched it growing up. I mean, I’m sure it will be everything I’ve imagined and more. I will lock in there, and hopefully we’ll get a victory.”

Cantlay’s excitement is well-founded. His win at the BMW Championship on Sunday clinched the final auto-bid spot on the U.S. Ryder Cup team at Whistling Straits, where he will compete for the first time in his career in late September. Yes, after a string of strong performances and a win at the Memorial, Cantlay was likely to make the team regardless, but his victory in Baltimore removed all doubt.

Behind Cantlay, a loaded field of American stars will begin holding its collective breath, and gunning for strong performances in the coming weeks to solidify themselves as one of the final six “captain’s picks.”

Here’s a look at who’s in, who’s out, and who’s on the bubble for U.S. Captain Steve Stricker over the next two weeks as he debates his final six roster choices.

The fourth-ranked player in the world by Official World Golf Ranking, Cantlay is in the midst of one of the best seasons of his professional career. He’s amassed four top-3 finishes in 2021, the second-most of his career, and currently ranks top-10 on tour in three strokes gained categories.

Wins at the BMW and Memorial solidified his automatic selection onto the U.S. team, but there are concerns about his recent ability to rise to the occasion. Three of his five missed cuts in 2021 came at the Players Championship, the Masters and the Open Championship (his only top-20 finish at a major came in a T15 bid at the U.S. Open).

The first player ever to win two majors in his first start at those majors, Morikawa was the first Ryder Cup auto-qualifier on U.S. side, and perhaps its biggest lock. His putting has waxed and waned, but his play with leads in big spots and his ballstriking abilities would seem to indicate a strong resume.

DJ hasn’t done much in 2021, but he still managed to wind up the second-highest point-getter under the Ryder Cup points system. His experience in the event is an added benefit.

DeChambeau is playing well right now. How his game will withstand the pressure of a Ryder Cup, if he’ll be able to make amends with Brooks Koepka will be the biggest storylines heading into tournament week. Some other notes of interest for golf’s most interesting man? DeChambeau’s poor prior performance at the Presidents Cup, and his decision to compete in a long-drive event immediately after Whistling Straits.

Bryson’s foil is in the mix, and the big question surrounding his game is his health. Koepka looked good in consecutive top-5 finishes at the U.S. Open and Open Championship, and his game seems to be returning to form after being plagued by knee injuries for the better part of the year.

It’s been a while since JT’s victory at the Players Championship in March, and his game has struggled at times (top-15 finishes at the Northern Trust and Valspar notwithstanding). Still, Thomas belongs in the mix and ranks near the top on Tour in several advanced metrics.

Two years ago, it seemed rather unlikely that Jordan Spieth would be on the outside looking in at the end of auto-qualifying. He is — resting comfortably in the ninth spot in the U.S. rankings — but he’s not going anywhere come September. Spieth is once again looking like his old self … or something like it … playing confident golf and contending regularly. Just about the only question with his Ryder Cup status is who he’ll pair up with for fourball and alternate shot.

Hard to believe the fifth-ranked player in the world will be left off the U.S. team. Even harder to believe given Schauffele’s gold-medal winning performance representing the U.S. in Tokyo just a few weeks ago. So we won’t believe it. Xander will be on the team.

Things change quickly in the world of the Ryder Cup. Finau might have been on the bubble as of two weeks ago, but his win at the Northern Trust (his first full-field Tour event, and second ever) helped to make an emphatic case for his inclusion. His performance at the Presidents Cup in 2019 can’t hurt, either.

Who’s on the bubble

Once again a tale of the last two weeks. Reed is a likely choice if he’s healthy, but Captain America was hospitalized with double pneumonia last week and is now recuperating at home. It would seem his chances of competing for the U.S. team depend upon his health. Here’s hoping for a quick recovery, regardless of team status.

English picked a good time for the best season of his life. The numbers say his selection is an easy choice, but his lack of experience competing for the U.S. could be a roadblock.

Ice cold in a few big moments this year and throughout his career, and clearly takes great pride in representing the U.S., but how do the U.S. captains view him?

The opposite of Berger. Historically a U.S. mainstay, but has his recent play been enough to deserve a spot?

He won the PGA Championship and he’s Phil Mickelson might be a compelling argument. Is it compelling enough to earn a playing spot in place of the names listed above and below? We’ll see.

Has played some of the best golf of anyone alive in 2021, but he’s inexperienced and doesn’t yet have a marquee win to his name.

Mr. Experience. Mr. Match Play. Some have wisely pointed out that he’s precisely the type of player the Europeans lean on year after year to defeat the U.S. But he’s got ground to make up on the names listed above, and the U.S. doesn’t typically choose players purely strategically.

He’s been one of the best 20 players in the world over the last 12 months, but he’s not playing in the FedEx Cup playoffs on account of his lacking Tour status (an asinine rule if there ever were one). Could be difficult to make a late push onto the team despite a runner-up finish at Augusta in April.

C’mon. He’s Bubba freakin’ Watson. A fan favorite. Loads of Ryder Cup experience. But he’s also ranked 67th in the world, and is more than a year removed from his last top-5 finish.