The first day I laid eyes on Royal Liverpool, I couldn’t shake the feeling that I was doing something wrong.

It was a Sunday afternoon and I was there just to see the property, no swings attached. A bit disoriented (and at the behest of a flustered Uber driver) I entered the abnormal way, between the 7th and 8th holes, actually about three-quarters of a mile from the clubhouse. I worked my way in that direction, past a public path that leads to the beach. “STOP,” a sign read. “Beware of golf balls from right & left.”

I was visiting Royal Liverpool to take some pictures, fly a drone for the video you’ll see below and to get a general lay of the land. Maybe a couple dozen players were on the course, the sun beginning to set and give the yellow fairways a little extra glow. It looked too good and felt too easy to be true. Surely something was happening in town or down the coast for this peninsula to seem so perfect. But after getting to know its fairways and the people who walk them, I started to understand this is what you get at Royal Liverpool most days during summer: a breeze off the Irish Sea, the distant sound of beach-bound residents and not a soul in your way.

That won’t be the case next summer, of course. That was still tough to picture: How would this quiet, tidy, sun-splashed place of solitude look when it hosts the 2023 Open? It’s one of the endearing aspects of this major championship that isn’t quite matched by the others: the Open routinely visits small towns. St. Andrews, Troon, Portrush, Gullane. And while nearby Liverpool isn’t small, Hoylake itself is. Just 5,000 people reside there and just 12,000 more live in nearby West Kirby. The golf course itself actually takes up about a third of the acreage in that corner of the Wirral Peninsula. As Open-goers found out this summer at St. Andrews, in towns like these, there are really only so many beds to go around.

That high demand for low supply is part of what makes these small-town Open weeks so magical. You could find any number of pros walking down Market Street this year in St. Andrews. The same scene will play out on Market Street in Hoylake in nine months. For seven days the restaurants will stay open later, the cafes will open earlier, and the bars might even pour you a pint at 1 a.m. It’s good for business, it’s good for the townsfolk, and it’s good for members of the club. Royal Liverpool embraces the Open and everything that comes with it — even when that means embracing significant change.

When Rory McIlroy and gang revisit Hoylake next summer, they’ll find a few big adjustments, some more obvious than others, all of them advice from architect Martin Ebert. If hosting the greatest players in the world is what you’re after, modernizing your course is high on the priority list. For proof, see the 15th hole, which gave us a hearty introduction when we played there in August during a sprint around the U.K. Check it out below.

Three years ago, the 15th ran from west to east, measured around 160 yards and typically played downwind. It was mostly grassy with a quintet of greenside bunkers. Now? Record scratch. The hole has been flipped 180 degrees and shortened to about 135 yards. It points west these days, facing the Irish Sea and the islands off its coast. It’s earned a new name — Little Eye, the name of one of those islands — and has a much more rugged look. Green paths of turf weave between the sandy waste bunkers short, long and off the left. If Royal Liverpool is going to be next to the beach, this hole helps you feel like you’re near the beach, more than any hole on the property. Head Pro John Heggarty called it a “cute” way to break up a stretch of four or five lengthy finishing holes. It’ll serve as the 17th hole during next year’s Open, when the nerves of finishing off a major championship will make it anything but cute.

As a matter of exercise, can you think of another 100+ year-old club that would do this? That would pick up one of its historic holes like it’s a figurine, flip it around, examine it from another angle, set it in place and tell its members, “surprise!” It just doesn’t happen. But it’s an example of club mentality. “Our view has become progressive traditionalism,” said Tamara Allen, a member of four years who played with us during our trip. “Or you might even call it traditional progressivism. You can’t stand still. You’ll move backwards if you stand still.”

In order to keep from standing still, RLGC has gone so far as to scan TripAdvisor for hints at how it can improve its operations. Shinnecock does not care about TripAdvisor, I can promise you. Royal Liverpool does, at least a little bit. “There’s a saying that [Bernard] Darwin said that Hoylake is fundamentally owned by the members, but it’s also owned by the world of golf,” Heggarty told us. “When you have a golf club that is as prestigious as this, we don’t have a philosophy that’s ‘Let’s keep it closed so that people can’t come and share it with us.’ We as a golf club are enthusiastic to have visitors come to the club, simply to share our heritage and share the links with them.”

If visitors feel a certain way, and members seem to agree with it, why not make these reasonable changes? Royal Liverpool has leaned into that why not mentality while maintaining the legacy they’ve inherited. In doing so, they’re embracing the responsibility of getting the Open to return in, say, 2029. And then again maybe six-to-eight years after that, and maybe seven years after that, and so on. The astute golf nerd will find changes on what the pros will play as the 4th, 7th, 8th and 13th. The most obvious — besides the now-reversed penultimate par-3 — will be the back tees added to the 18th, stretching it to a modern maximum of 607 yards. R&A officials walked the property as we visited, checking the changes beneath their feet.

But the beauty of RLGC isn’t exclusively in its willingness to change but the way it works its way to that change. Some stuff goes, some stuff stays. The good is agreed upon, the less-than-good gets adjusted. That’s the process, and that’s how it’s been since the club’s inception. Inside you’ll find a leather-bound navy blue ‘Suggestion Book’ that incorporates member suggestions from decades ago, continuing through recent years.

When a motion was put forth during the club’s first year of existence to change its name to an absolute mouthful — The West Lancashire and Cheshire Golf Club — the membership thankfully stepped in and made the right decision for future golf writers worldwide. Years later, when the horse races at Liverpool Hunt Club began to shift elsewhere, Royal Liverpool grasped on to that history and held it. Some stuff goes, some stuff stays. Today, where bicycles and horses used to fly, so does your first tee shot. Therein lies the traditionalism half of ‘progressive traditionalism’: a wicked, unique test and an out-of-bounds boundary unlike any you’ll find anywhere else. Only at Royal Liverpool.

Our trip would not be possible without the help of FootJoy, who hooked us up with the kind of gear you need for links golf. In the videos from that trip you’ll see me rocking my favorite piece of apparel, a baby blue hybrid jacket that helps cut the wind — but also doesn’t lead to overheating when the sun is out. Check it out for yourself at the link below. 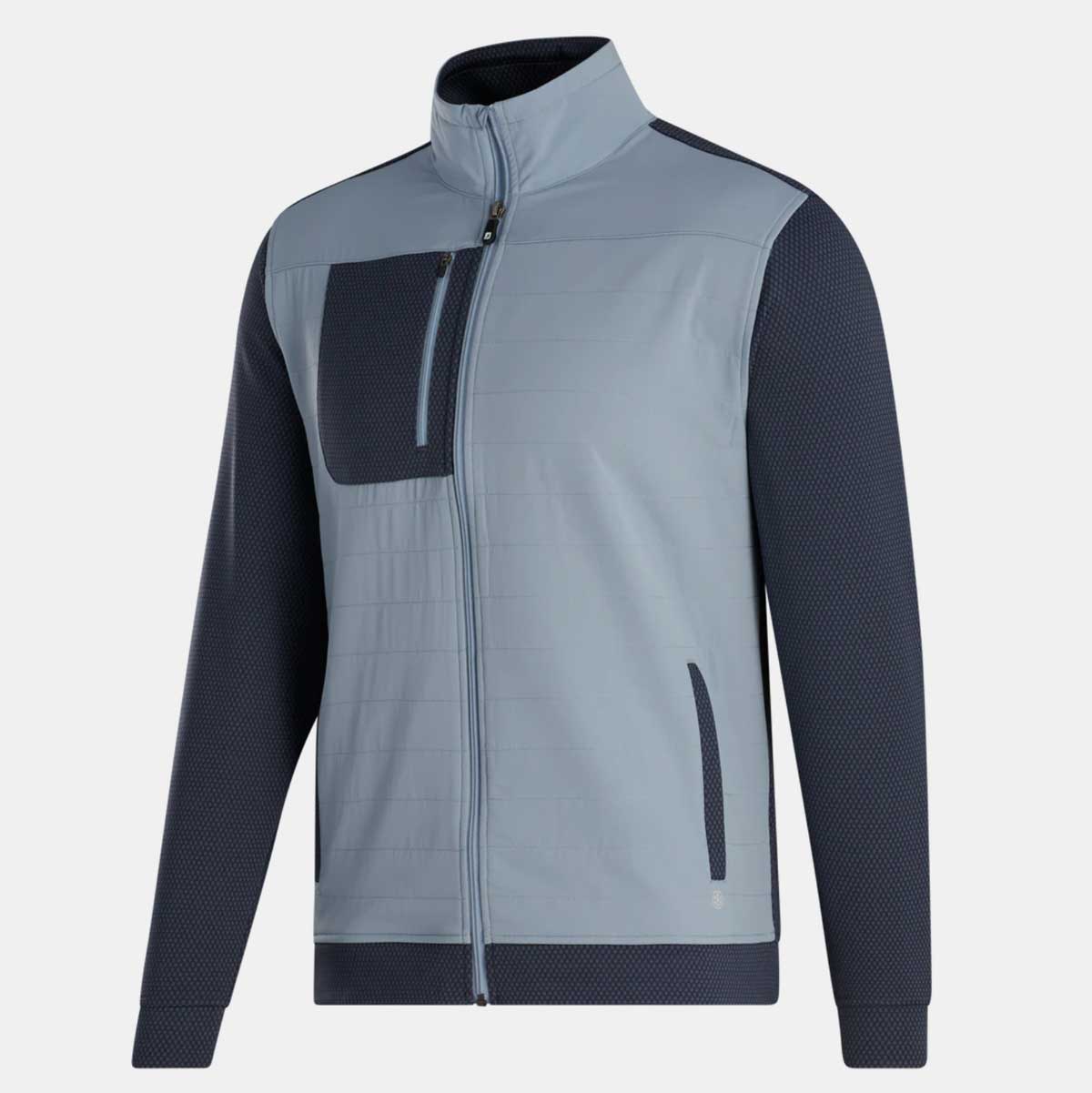 $175
A woven shell material offers 4-way stretch ability for improved range of motion and wind resistance. A full front zipper allows for easy access wear during changing weather conditions. Side pockets allow for hand comfort and warmth. The protected chest pocket gives you access to your scorecard, glove, wallet, without exposure to the elements.
Shop Now