10 mistakes to avoid while planning an epic U.K. buddies trip

You show up to play in the linksland, you'd best come prepared.

This wasn’t just a trip available because we were a couple schmoozy, moochy golf writers. The beauty of Open Championship courses — and top U.K. courses in general — is how accommodating they are to out-of-towners. As long as you’re willing to pay an elevated rate, they’re willing to take your money. They’re reliant upon it, in fact, to keep the course in prime condition and charge the locals an extremely reasonable rate. (Most annual memberships are about $1,000 to $1,500.)

In other words, it’s time for you to be planning your trip to the linksland, too! And while it’s tough to narrow down where you should go (a topic for another day), here are 10 lessons we learned so you wouldn’t have to.

Oh, and if you want to see what came of our trek, here’s Day 1 at Royal Portrush, Day 2 at Royal Liverpool and Day 3 at Royal Troon.

I’m not talking about the one you can’t stop slicing. I’m talking about someone who can operate a motor vehicle on the left side of the road; a big right miss is far more costly on the roads than on the course.

There are plenty of ways to tackle this, depending on your comfort on the other side of the road, the size of your group and the length of your drives. I flew into Dublin and then took a bus and a train to get to Portrush, Northern Ireland. The rest of the way I entrusted my safety to Zak, who misses plenty of fairways but keeps it in play on the roads.

If you have more than a foursome, it could be worth investing in a driver with one of those cool vans or mini-buses that would make you the envy of the countryside. Otherwise just make sure you have some sort of plan beyond playing rock-paper-scissors at the rental car center when you arrive.

Northern Ireland is relatively remote. Before 2019 it had been long-absent from the Open rota. In other words, it’s not often people’s first instinct when it comes to big-time links trips. But man, what you’ll see if you do go.

We started our trip at Royal Portrush, quite literally one of the best golf courses in the world, its 18 holes draped over dramatic seaside terrain, beach on one end and cliffs on the other. The downtown is just a short walk from the course, where a string of pubs, shops and restaurants stretches out on a spit that sticks into the chilly Atlantic Ocean.

Portstewart, another dramatic seaside dunescape course ranked on our “Top UK and Ireland” list is just a short drive from Portrush. You’ll find gems on your trek down its east coast, including personal favorite Ardglass. And you can try for a time at Royal County Down, which like Portrush, sits near the top of everyone’s list. Northern Ireland — it’s where it’s at!

The issue of “too much daylight” is generally a good one to have, particularly on a golf trip. But many small-town U.K. restaurants may not particularly care that you decided to sneak in a bonus nine holes well after 9 p.m. local time. Many top links courses are in these small, out-of-the way enclaves that have terrific vibes but also cooks that go home at 8:30. Make a plan going in to avoid mutiny from the hungriest members of your crew.

4. Don’t recreate one of the worst moments of Rory McIlroy’s career.

This came at Royal Portrush, too, when Zak paid incredible tribute to the Northern Irishman’s opening tee shot at the 2019 Open by taking hybrid and yanking a pull-hook that settled in almost the exact same spot that McIlroy’s did, definitively out of bounds. Then he did so again, this time barely in bounds, just like McIlroy. There are plenty of iconic shots to emulate at these courses — try those instead. (Or just do what Sean did. Memory of a lifetime!)

This one occurred to me just before 4 a.m. when the alarm in our Portrush AirBnB jolted me to a very startled place. Please, please don’t take this as a complaint; we’d plotted our dream trip this way! But if you’re going with a bunch of buddies, remember: you are on vacation. You should do some sleeping. And you should settle in as much as you can.

There are so many epic stops across the U.K. and Ireland that it’s easy to try to pick ’em all off at once. I’d advise you to resist that urge. Instead, rent a house somewhere. Make yourself a home base. And then tour from there, playing the coolest courses within a day’s drive. Feel free to have a couple different home bases, especially if you’re there for an extended period. But there’s something nice about settling into your room for a few nights — and something exhausting about unpacking your suitcase only to re-pack early the next morning. Speaking of which…

6. Don’t squeeze in too much golf.

It’s all relative, of course. You should pack in a lot of golf. But I wouldn’t put pressure on yourself to play, say, two bucket-list courses in one day. That’s a lot of pressure and it’s sensory overload. If you’re there for a few days I’d recommend a recipe of a dreamy course in the morning and then taking on something smaller and more approachable in the afternoon/evening, for those inclined. This is a land dotted with fun nine-holers, short 18s, town courses with character and quirk even if they don’t end up on any list. Seek those out for your supplemental golf. That way you’ll stay fresh for your next big task the next day.

Just a sidenote, but this one speaks for itself.

It’s often chilly in the morning. Warm during the day. Chilly in the evening. And unpredictable in between. There’s a reason professional golfers (including Tiger Woods!) have leaned on the sweater-vest, an otherwise objectionable piece of clothing: It serves an important golfing function. Bring some layers, folks. That’s your No. 1 packing priority. 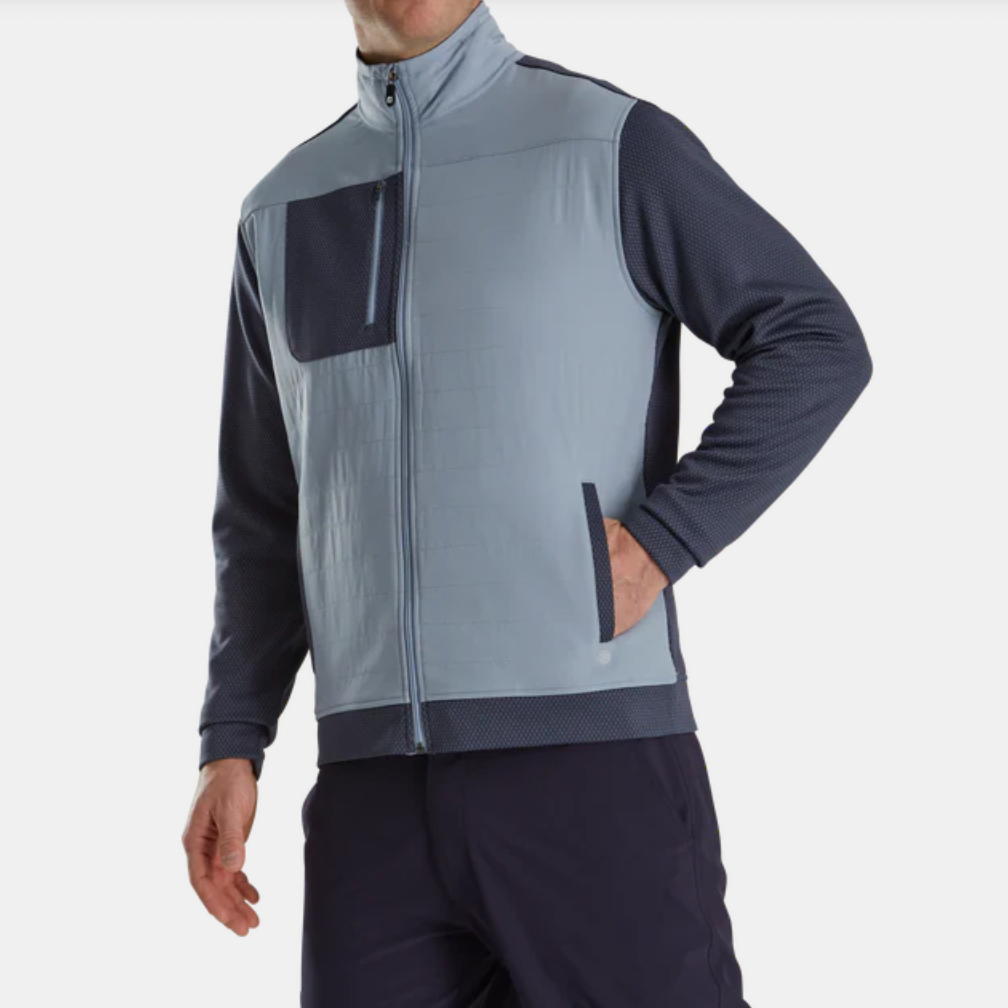 $175
ThermoSeries is designed for layering, allowing you to be adaptable and versatile on the golf course in all conditions.
SHOP HERE

This is related to No. 7 but it’s arguably even more important. If you play in the rain without rain gear you’ll end up soggy, cold, miserable. Your clubs will slip. Your clothes will suffer. Your golf game will be irrelevant; you’ll just want the day to be over. But with good rain gear (plus good layering), all things are possible. Footjoy helped sponsor our trip, so we were fully geared up with the very best waterproofs that golf has to offer, and it made a massive difference. As we trekked Royal Troon, a massive rainstorm came up out of nowhere. During one stretch of sideways downpour, golf felt ridiculous. But as it slowed, we were…actually completely fine. The waterproof stuff works scary well. Rain gloves remain the best invention in all of golf. And you need to own a rain suit and rain gloves before you consider anything else on this list.

This was another experiment we tried at Royal Troon: Zero negative comments. It’s a great idea, in theory. Links golf trips come with unique challenges of weather, of conditions, of brand-new courses, and some grumbling is natural. But a quest for relentless positivity had, in my experience, the unintended side-effect of building frustration instead. I left the round thinking it’s important to give yourself permission to get upset, at least for just a moment. Everybody needs a pressure-release valve so they don’t eventually explode.

Tiger Woods’ oft-cited strategy makes a ton of sense in this context: Give yourself 10 steps. In other words, you can get mad. You can be unhappy with your shot, with the shot’s result, with the conditions, with your mental state, with anything. (Woods often would get mad, you’ll recall.) But once you take 10 steps, it’s over. You’re on to the next shot. Use that time to put the past behind you.

Want to have fun on your trip? Make sure you have some way to evaluate your rounds other than your 18-hole stroke-play score.

First of all, give yourself a break! You’re playing new courses, playing a different style of golf, potentially playing in wind and rain and all manner of challenges and putting pressure on yourself to perform.

Forget that! Forget at least some of it, at least. Get a fun match going. Links golf was built for match play. Buddies trips were built for team play. Try stableford! Build in a feedback system that ensures a gorse bush isn’t going to ruin your day. You can still keep your score, of course. But by keeping your focus broader you can ensure you’ll keep your head in the game, enjoy your round that much more and provide better company to the rest of your group.

I’ll let you get back to planning.