JERSEY CITY, N.J. — Rory McIlroy and Brooks Koepka are arguably the two best golfers on the planet right now. They both have four major championships, and the duo will be paired together for the first two rounds of The Northern Trust this week at Liberty National Golf Club in Jersey City.

McIlroy and Koepka have something else in common, too: a distain for slow play on the PGA Tour. When both were asked by reporters on Wednesday for their thoughts on the matter, they did not hold back their criticism.

“I don’t think it’s fine to do nothing because it’s genuinely a problem in our game,” the 30-year-old McIlroy said. “It starts at our level because people try to emulate us. I’ve heard stories of college events and how long they take. There’s no reason why it should take that long.”

This isn’t McIlroy’s first critique of pace-of-play on Tour. “They don’t do anything about it,” McIlroy said when asked about it at the Players Championship this past March. “It’s become somewhat of an epidemic on Tour.”

On Wednesday, McIlroy didn’t just complain. He offered a solution to the problem.

“For me, I think the guys that are slow are the guys that get too many chances before they are penalized. So it should be a warning and then a shot,” McIlroy said. “It should be you’re put on the clock and that is your warning, and then if you get a bad time while on the clock, it’s a shot. That will stamp it out right away.”

“I don’t understand why we can’t just implement that,” McIlroy continued. “We are not children that need to be told five or six times what to do. Okay, you’re on the clock, okay, I know if I play slowly here, I’m going to get penalized and I think that’s the way forward.” 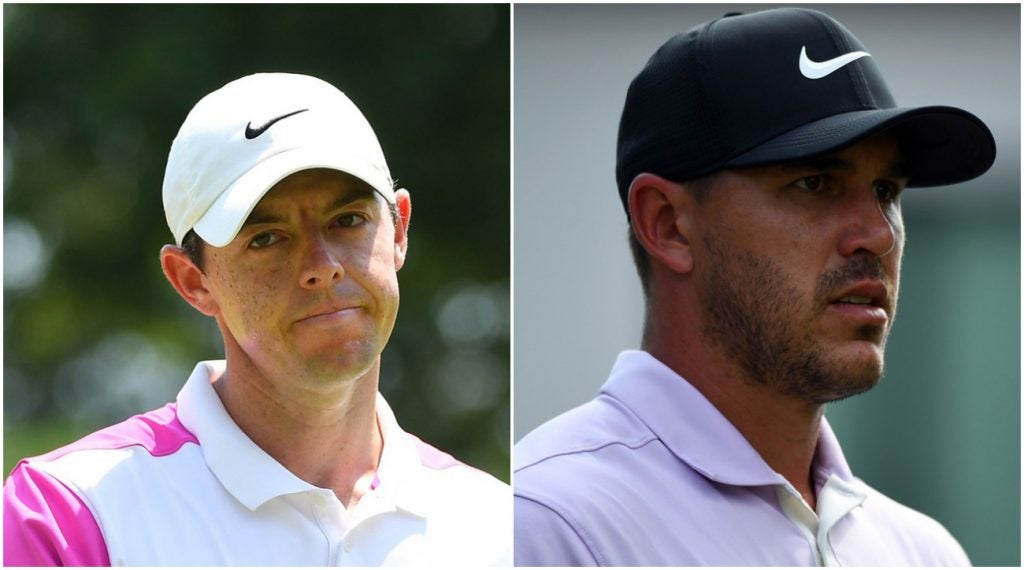 Rory McIlroy and Brooks Koepka are both fed up with slow-play.
Getty Images

The good thing for McIlroy is that he won’t have to worry about being slowed up by his playing partner Koepka on Thursday and Friday. The 29-year-old Koepka, like McIlroy, pulled no punches when discussing slow play himself.

“I don’t think anybody likes waiting,” Koepka said. “Especially if you’re going to be sitting on a tee box for 15 minutes to hit your tee shot. I get that you can take a long time for your thought process, but once you’re done thinking about, just go. What else is there to do? That’s been the problem I have.”

The No. 1 player in the world has arguably been the harshest critic of pace-of-play on Tour. Koepka feels as if he’s had to take the matter into his own hands.

Celebrities
Koepka on slow play issue: The best players in the world are taking their sweet time

“I think it’s just gotten out of hand,” Koepka said. “It seems now that there are so many sports psychologists and everybody telling everybody that they can’t hit it until they are ready; that you have to fully process everything. I mean, I take 15 seconds and go, and I’ve done all right.”

“It’s just frustrating as a player when you’re out there,” Koepka continued. “Sometimes they might be trying to decide what club to hit. Well, you’ve had a day to think about it, and it’s pretty clear what the tee shot is. A lot of times it’s on the simpler shots. The difficult ones, you already know what to do with it, but it’s the simpler ones where guys seem to take their time.”

During the final round of the Open Championship at Royal Portrush in July, Koepka played alongside J.B. Holmes, notoriously derided for his slower pace. Koepka struggled at the start of his final 18 holes, and it led many to assume that the pace of play was throwing Koepka off his game.

On Wednesday, he refuted that.

“No, I don’t care,” Koepka said. “I’ve played with slow players a lot. It doesn’t bug me. It might annoy you, but it doesn’t affect how I play. I’m not trying to speed up. I’m trying to do the opposite. I’ve said that. Try to get put on the clock, but that doesn’t seem to work because nobody will penalize anybody. And you know what, even if I take over 40 seconds, penalize me. I’ll be the guinea pig. It doesn’t matter. It needs to happen.”

News
‘No one has the balls’: Brooks Koepka roasts PGA Tour rules officials for lack of slow-play penalties