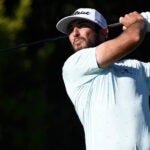 Max Homa hits his tee shot on Saturday on the 4th hole at Riviera Country Club.

Max Homa, during Saturday’s third round of the Genesis Invitational, had 81 feet to the hole on his second shot on the 304-yard, par-4 10th hole at Riviera Country Club. Between him and the pin, Homa had about 15 feet of green to work with, and between the pin and the back of the green, there was just another 15 feet.

Oh, and Homa was in the right greenside bunker, his ball was a yard from the lip, and he had about 60 feet of sand in front of him.

And that wind that had earlier delayed play for four hours? It was at his back.

And the greens were dry and fast.

“Surely there’s no way he can keep this on the green,” analyst Trevor Immelman said.

Homa lofted his ball out, it bounced on the fringe and rolled to within 7 feet of the cup. He would roll in the birdie putt.

One PGA Tour pro and a few of his followers on Twitter went further.

Unlike the shot, “today” fell short.

“Hey @PGATOUR stat guys…how many people in the history of Riv have hit it in the front of the front bunker on #10, got it up and down for birdie, and left it short of the pin on the green down wind? Nvm I know…it’s 1. 1 person. That was F@%&ING UNBELIEVABLE @maxhoma23,” Mark Hubbard tweeted Saturday night.

“Hard to describe how great that shot was,” @DavidMcMichael4 tweeted.

“That bunker shot scared me and I was only following on shot tracker.” @Heavy_C tweeted.

Two hours after Hubbard’s tweet, Homa tipped his cap to the virtual applause.

“Haha thanks Hubbs!!” he tweeted.

'I'm a realist': Pro offers most candid explanation yet regarding LIV Golf participation

Why does Tiger Woods' ex-coach think Jordan Spieth is struggling with putting? Yips

How Jordan Spieth perfected the art, and importance, of the autograph