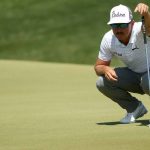 Rickie Fowler fired a final-round 71 at the Ocean Course.

Bogeying the final hole of a round is enough to leave a sour taste in anyone’s mouth, but Rickie Fowler’s dropped shot on the 72nd hole at the PGA Championship was costlier than most. With the bogey, Fowler cost himself an exemption into next year’s Masters — an exemption the 32-year-old desperately needs with a World Ranking that has slipped to 128th.

Fowler came to the 18th hole after playing beautiful golf all day during the final round at the Ocean Course. He’d made two birdies and no bogeys, enough to sneak into a tie for fourth. But after an errant approach into the bunker, he faced a 14-footer with massive implications.

He lined up his ball, went through his routine and struck the putt. Just feet from the cup, it looked as though it would sneak in the right side of the hole. Instead, it caught the lip, took a sharp left turn and spun out.

It dropped him from a tie for fourth into a tie for ninth. No more guarantee of a drive down Magnolia Lane next spring.

Fowler’s struggles over the last several years have caused him to plummet in the World Golf Ranking. When he fell outside the top 50 late last year, he put his major-starts streak — which had dated back to 2010 — in jeopardy. With more lackluster play in 2021, he missed the Masters for the first time in a decade.

But the week was not all for naught for Fowler. With the top-10 finish, he at least secures a trip back to the PGA Championship in 2022, and a healthy number of World Ranking points.

If Fowler was glum, it didn’t show. As has become his custom, he sportingly hung around Sunday evening to congratulate the victor.