Rickie Fowler has been trending up. Ask Michael Jordan 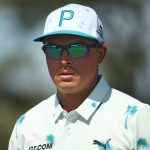 Rickie Fowler during the first round of the PGA Championship.

It would be way premature, of course, to say Rickie Fowler is “back!” after his opening-round one-under 71 on the shin-kicking Ocean Course, but he was undeniably back in the press center. Fowler, who has dropped to 128th in the world and is in the PGA Championship field courtesy of a special invite from the PGA of America, earned himself a spot at the podium on Thursday with a solid three-birdie-two-bogey effort that has him tied for 15th in the early going.

“Definitely happy with the start,” Fowler said. “It’s Thursday. As everyone says, you can’t win it, but you can take yourself out of it on Thursday.”

Fowler would know — at least, of late he would. In 11 starts in 2021, Fowler has just one top-20 finish and five missed cuts. His last top-10 came 17 months at the limited-field 2020 Sentry Tournament of Champions. His last win: the 2019 Waste Management Phoenix Open.

Largely his struggles have been on the greens. “The putter has gone pretty cold, if not the coldest it’s ever been for me,” said Fowler, who ranks 178th in strokes gained: putting this season, “and that’s been a club I’ve been able to rely on through my career from junior golf on up.”

The good news for Orange Nation?

“I’m starting to feel pretty darn good,” Fowler said of the state of his overall game. He said he was playing too much “swing” as he worked on rediscovering his form, and now he’s playing golf again. Less thinking, more freewheeling. “Things can still get better, but we’re back to playing golf and hitting shots and having fun,” he said.

Some of that fun has been unfolding back home in South Florida at The Grove XXIII, Michael Jordan’s buzzy new hangout, in Hobe Sound. “The practice facility is bigger and [also] less people over there,” said Fowler, who also spends time practicing and playing the Medalist and Bear’s Club, two courses teeming with Tour pros.

On a recent episode of GOLF’s Supbar, Fowler told hosts Drew Stoltz and Colt Knost that Jordan — who has never shied away from a money match — has the Grove’s setup so dialed in to the strengths of his game that he’s tough to beat there. The 10 strokes Fowler gives MJ don’t help much, either.

But as Fowler’s game has tightened up, so, too, have his matches with Jordan.

“I think not having to hand out any money to MJ has been probably the bigger win,” Fowler said Thursday, adding that his goal against Jordan is “to win the original match and not have him flip the original match because of the press or multiple presses. If I don’t lose money to him, that’s actually a win.”

When asked if Jordan plays quickly, Fowler said, “Oh, yeah, but you have to be as well. When I say 10 shots, it’s not that he’s — he’s good. A lot of the guys in the shop, there’s side bets and stuff, typically the over/under number is 77.”

If you took the over on 71 for Fowler’s first round at Kiawah, you lost. The blustery conditions on this barrier island suit his game. Fowler thrives in the wind, always has. He played college golf in windy Oklahoma and practices in coastal breezes in Florida. He has two top-fives at Open Championships and a Scottish Open title. The Ocean Course is his kind of course.

“With this golf course and the wind and what it kind of demands of you, you can’t try and go out there and be perfect,” he said. “You’ve just got to go out there and hit golf shots and kind of play with what you have that day. A lot of times you can’t fight the wind out here. It’s heavy, as you guys felt being out on the golf course. It’s a fun challenge.”

This week, it might just be the right challenge to get him back on track.