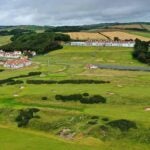 In the wake of last week's Capitol riots, the R&A has announced that Trump Turnberry will not host any championships for the foreseeable future.

The R&A announced in a statement Monday morning that they will not host any of their championships at Trump Turnberry for the foreseeable future. The announcement comes on the heels of the PGA of America’s Sunday-night decision to move the 2022 PGA Championship from Trump Bedminster in Bedminster, N.J.

“We had no plans to stage any of our championships at Turnberry and will not do so in the foreseeable future,” Chief Executive of the R&A Martin Slumbers said in a statement.

Although there are no R&A events scheduled the be hosted at Turnberry in the immediate future, the announcement makes it clear that the governing body has no plans to take any of their championships to the historic course owned by the outgoing president of the United States.

Donald Trump bought the course in 2014 for a price of $60 million and it was renamed Trump Turnberry.

“We will not return until we are convinced that the focus will be on the championship, the players and the course itself,” Slumbers said. “We do not believe that is achievable in the current circumstances.”

The announced exclusion of Turnberry from the Open Championship rota shrinks the list of courses from 10 to nine. The 2021 Open Championship is scheduled to be hosted July 11-18 at Royal St. George’s in Sandwich, England.

Steve Stricker on Brooks Koepka: 'He assures me that he is 100 percent all in' for Ryder Cup

Did we just get our first hint of potential Ryder Cup pairings?

'He still couldn't beat me': The 15 most controversial moments in Ryder Cup history